Emilie Ullerup plays Melanie Welch, a young woman who is a bit of a pushover with a good heart. Aaron O'Connell is Donovan Goodwin, a colleague who doesn't really care for anything that isn't in line with his career path, whether it is evenings out with people or the general atmosphere of Christmas cheer. These two people work in an advertising agency, and they are pushed together when the company is given a limited timeframe in which to come up with the latest seasonal advert for a mobile phone company. It also turns out that Melanie is given Donovan in the Secret Santa pick, and vice versa. Personal development and revelations follow.

I can already picture the faces of many people reading this review. The rolling of the eyes, the smirking, perhaps even the look of pity as they remember that someone has been writing these words after watching lots of these movies, as I like to do every year. I get it, I do, these aren't going to be films that you necessarily rush to revisit. They fill up the schedules in December and that's really their only purpose, because that's when everyone wants occasional doses of good cheer to accompany them as they recover from battling through crowds in stores or wrapping far too many gifts.

With Love, Christmas isn't even one of the better examples of this field of entertainment. The script by Marcy Holland (who has done a LOT of these, including The Spruces And The Pines, to name just one) is perfunctory, at best. There's enough Christmassy dressing on display, which is easy enough for Hallmark to do, but the plotting leaves a lot to be desired, especially when one of the big final reveals during the finale is pre-empted by scenes in which viewers already see things being figured out, removing any small bit of tension that could have been there.

Director Marita Grabiak, less experienced in this particular subgenre than Holland, keeps everything basic. There's no energy or sense of fun here, sadly, but every element is where it should be. If this was a meal then it would be bland and unimpressive to look at, but would provide you with all of the things your body requires from a standard portion of food.

With the direction and writing being so relatively lacklustre, it's up to the cast to lift things up. O'Connell doesn't have the ability to do that. Neither do the supporting players, including Rebecca Davis, Milo Shander, and Michael St. John Smith. Fortunately for all concerned, Ullerup CAN. She cannot perform miracles, of course, but she's good enough in her lead role to make this whole thing much more enjoyable than it would be with the wrong person heading things up.

If it didn't have Ullerup in it, this film would have been marked a point or two below average. Thanks to her presence, it ends up right in the middle. It's just a shame that the rest of the cast couldn't be as good, otherwise this could have risen even higher, despite the mediocre script and unenthusiastic direction.

I still recommend this set.
Americans should treat themselves to Mickey's Christmas Carol. 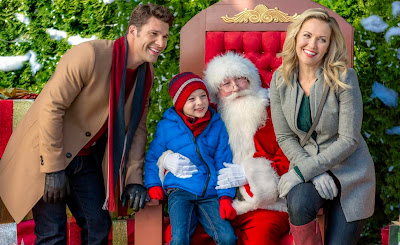