Fozzie Bear's mother, Emily, is getting ready to head off on a holiday when her plans are changed by the arrival of the whole muppet gang. Well, almost the whole gang. Ralph is lagging behind, somewhere, and Miss Piggy still has some way to go. This also upsets the plans for Doc (Gerry Parkes) and his dog, Sprocket, as they were going to be staying in the house on their own while Emily went off on her holiday.

Although not anywhere near as good as The Muppet Christmas Carol, or some of the other Muppet movies, this Christmassy TV special is fun throughout, full of the expected mixture of gags and songs. There's not much to it, and it's as forgettable as it is enjoyable, but fans of the fabric creations will find plenty to enjoy.

Directed by Peter Harris and written by Jerry Juhl, the simple plot not only brings together the usual gang but also allows screen time for residents of Sesame Street, some muppet babies, and even The Fraggles. The usual easy lessons are woven throughout the narrative, with one of the loveliest involving a scene between Swedish Chef and Big Bird, and nobody is wrapped to any degree, just to get them to fit into the seasonal storyline.

Apparently this first aired on my birthday in 1987, which makes it all the more depressing that I only got to it now, over thirty years later. It's easy enough to track down online, but difficult to find in a complete version, due to various rights issues leading to certain sections cut from most VHS and DVD releases (certainly in North America). Still, whatever version you end up seeing, this is a delight. There's a snowman that pairs up with Fozzie Bear for some comedy schtick, a running gag about a patch of ice at the doorstep, standard grumbles from Statler and Waldorf, and the sheer pleasure of seeing so many of these characters interacting with one another despite usually being kept to their separate shows (I can't tell you how stupidly happy I was to see Kermit and Robin meeting a bunch of The Fraggles).

There's also a sweet cameo from Jim Henson at the very end of the show, pairing him up with Sprocket for just a moment.

There's nothing more I can say about this. It runs for just over 50 minutes, it's never dull, and you'll already know if you want to watch, or rewatch, it. Fans of The Muppets will love it. Everyone else, well, they just need to find themselves a soul.

Here's a ridiculously overpriced disc, click on the link and buy something else.
This is the same, but for American folks. 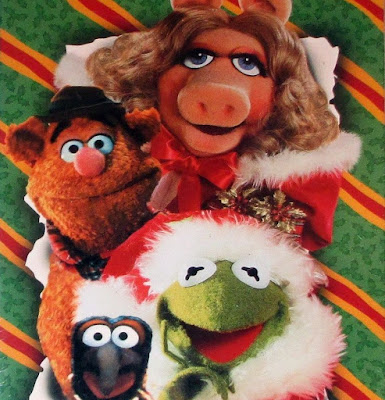