A group of friends get together for Christmas, which leads to inevitable disagreements and tension, as well as moments of bonding and fun. The usual Christmas mix. That's the basic premise for this seasonal horror that uses the holiday as an excuse to isolate some adults in a house in the middle of nowhere, letting viewers spend some time with them before an evil presence decides to mess with their heads while trying to kill them off, one at a time.

Charlotte Atkinson is McKenzie, the main character being kept in good cheer by her visitors. It's her first Christmas since the passing of her parents, and her friends want to help take her mind off the loss. McKenzie also had a sister when she was a little girl, but her sister disappeared one day . . . somewhere in the area surrounding the house that everyone is due to stay in.

Directed by James Edward Cook, who also co-wrote the script with Karen Taylor, Why Hide? (which has also been retitled recently with the much better name of Christmas Presence) is a film that almost does enough wrong in the opening third act to make it unwatchable. I wouldn't be surprised if some people gave up at about the 30-minute mark, missing out on the better stuff still to come. And some of the better stuff is very good indeed, with individual moments and scares proving to be surprisingly effective. When an unseen, or smoke-formed, presence starts to terrify the characters, things quickly go from bad to worse to mind-breaking insanity for the victims. Yet, there are still moments that try to ruin your enjoyment, including twists that are all too predictable and an ending that will have most viewers rolling their eyes as they watch it unfold and realise that it's quite simply an easy cop out (sorry, but it is).

The cast don't help, they're never being as good as they could be. Atkinson isn't even a strong enough lead, sadly, and there's not enough talent available in the pool of Elsie Bennett, Lorna Brown, Mark Chatterton, Orla Cottingham, and William Holstead to make up for it. I'm not saying any of them are awful, they just don't work together well enough to make a strong ensemble. Danny Webb stands out, despite his small amount of time onscreen, but his final moment is enough to make you want to throw something at the screen, which is again the fault of Cook and Taylor.

Ultimately disappointing, but worth a watch for the stronger moments interspersed throughout, Why Hide? is at least a horror film made by people trying to do something a bit different, which is commendable. The fact that it tries and fails still makes it better than a hundred other horror movies that are happy to just repeat what we've already seen again and again. I'll be interested in seeing what Cook does next, and hope he either lets someone else do the writing or works with someone who can recognise and call out the more obvious errors of judgement.

Here's a Christmas triple-pack of horrors.
Americans can get this double-pack. 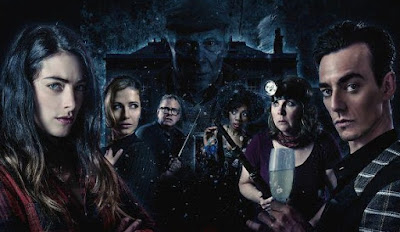