Zachary Gordon is Pete, a teenager who wakes up on what will end up being the worst Christmas of his life. He's had to share a bed with his younger brother (Jake, played by Peter DaCunha) because of a visit from his grandpa (Bruce Dern). His parents (Molly Parker and Rick Roberts) have forgotten to get his present. He's ambushed by local bullies with snowballs, he also has to take part in an annual football game that he hates, and the dinner ends up not being cooked after a power failure. And, worst of all, Pete wakes up the next day to find that he's going to go through it all again. And again. And again.

Yes, it's another Christmassy riff on Groundhog Day (only this one isn't quite as enjoyable as the fun Christmas Do-Over), and there's a time loop that cannot be stopped until just the right lesson is learned, of course, which usually revolves around, well, I am sure you can guess.

Director Nisha Ganatra may not have stayed in this particular field, I think this is her only Christmas TV movie (to date), but writers Gregg Rossen and Brian Sawyer certainly settled into their groove nicely enough (Peter McKay also helped write this, but didn't follow them on their career path). This covers all of the bases well, and does a decent job of mixing the festivities with the timeloop fun. The main problem comes with some of the editing in the last third of the film, sometimes not making it clear enough how much time has passed, roughly, as we watch Pete try to perfect his day with varying degrees of success.

Gordon is decent in the lead role, and he will be a familiar face to many who have seen some of his extensive filmography (by the look of his credits, he has been acting since he was a very young lad), while Bruce Dern lifts the whole film up with his wonderful performance as the grandfather. The other cast members do fine, but the only one I took extra notice of was Bailee Madison, who possibly started acting at an even younger age than Gordon (most notably in Don't Be Afraid Of The Dark and Just Go With It) and did a few other Christmas movies at about this time, before moving on to a number of other projects.

Although it never really fulfils its full potential, Pete's Christmas is a fun, teen-friendly, holiday film that just about offsets the sugary schmaltz with enough moments that are genuinely amusing. I mean, I recommend dozens of films ahead of this one, including the time loop movies mentioned in the second paragraph, but if you're stuck with only the main TV channels and this comes on . . . you could do a lot worse.

There's a ridiculously pricey dvd here. Please click on the link and buy something else instead.
Or everyone could buy this cheaper disc from America. 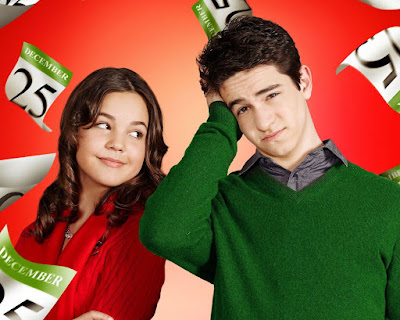