If there's one thing I enjoy more than a Christmas movie, it's a good bit of time-travel fun. So when I heard that Journey Back To Christmas mixed in both of these things, well, I was sold. Yes, I have said this so many times that anyone who has read some of my other reviews will know it doesn't take a lot to sell me on something. But it keeps me happy.

Candace Cameron Bure plays Hanna, a nurse in WWII who ends up somehow transported to the future (2016) and has to figure out a) how to convince people that she's not insane, b) how to get back to her own time, and c) how to teach people a valuable lesson that feels in the spirit of the season. Luckily for her, she ends up in the company of some people who believe her story quite easily, and who are quite willing to learn a thing or two from Hanna, which really only leaves her having to figure out how to get back, if that's at all possible.

Although she doesn't seem to be someone I have seen in many other movies (strange, considering how many of these things she has starred in, although I reviewed the poor A Christmas Detour here), Bure is a likeable enough leading lady, portraying the sweeter than sweet heroine we often see in these Christmas features. The supporting cast are fairly bland though, although that's also often the case for these particular movies, with the only two standing out being Oliver Hudson, playing the police officer who seems strangely trusting of this woman who claims to have come from the past, and Tom Skerritt playing someone who reveals his identity in a timely fashion during the third act. Brooke Nevin isn't too bad in the role of Sarah, who obviously holds a candle for Hudson's character, but the rest of the supporting players may as well not have been there, for all they add to the experience.

Of course, part of that is the fault of writer Maria Nation, who takes a fun central idea and then tries to ruin it with unnecessary distractions. A few less scenes showing the local resident who views Hanna as a danger and a few more scenes of Hanna adjusting to 21st-century life and this would have been a lot more fun.

Director Mel Damski also could have done more. The film feels Christmassy enough, there are plenty of decorations on display and the requisite supply of snow, but it doesn't quite tick everything off the checklist that viewers may want from this kind of fare. I'm not saying that I REALLY wanted a sequence showing Bure being taught a song & dance routine for "Christmas In Holliston" but I'm not saying that including such a moment wouldn't have elevated this into one of my new favourite holiday movies.

I'm surprised that I liked this as much as I did. That may say as much about all of the other movies I have watched recently, and I've also already started to overdose on hot chocolate and advent calendar sweeties, but I'll recommend this one to anyone who wants yet another one to add to their overflowing viewing schedule this month.

A region 1 disc can be bought here. 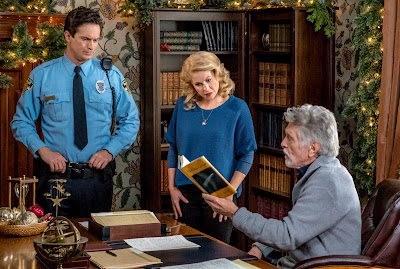