Christmas Wedding Planner, how do I get irritated by thee? Let me count the ways. I had heard that this was bad. My wife gleefully read out some reviews and told me that I should see if I could endure it. "Pah," I replied (in my own head), "I am a veteran of these movies. It shall pose no serious challenge to me." Only 30 seconds into the movie, I realised that this was going to be a chore.

What made me realise that this was going to be difficult to get through? Well, this movie starts off with the worst rendition of Jingle Bells I have ever heard in my life. Seriously, it's as if someone decided to sing it in the style of a teenage Taylor Swift (when she was still singing songs that were more country than pop) tribute act. That was the first warning sign.

Then I came to the horrifying realisation that it was directed by Justin G. Dyck. This is one of the people responsible for causing me some pain last year when I watched 48 Christmas Wishes, which at least had the excuse of being aimed solely at children. The fact that he's now two for two should ensure that I avoid his name on all other projects, but it won't. Fool me once, shame on you. Fool me twice, still shame on you. Fool me again and again and again, it doesn't matter when I refuse to feel shamed.

Let me get to the plot. Jocelyn Hudon plays a wedding planner named Kelsey, although she hasn't actually planned any weddings yet. This will be her first, the marriage of her cousin, Emily (Rebecca Dalton), to a good egg named Todd (Eric Hicks). But it could all be jeopardised by the interference of Emily's ex, Connor (Stephen Huszar), who is an investigator out to show that Todd isn't the goodie that everyone thinks he is. There's also an overly critical aunt (played by Kelly Rutherford), a jovial Joey Fatone kinda restauranteur (played by Joey Fatone), and three bridesmaids who are credited as, and I am not joking, Jealous Bridesmaid, Clumsy Bridesmaid, and Bitter Bridesmaid.

Is there anything here that works? Yes. Some may argue against my opinion here, but I don't think Hudon and Huszar are that bad as potential leads. Unfortunately, I have to refer to them as potential leads because both the director, Dyck, and writer, Keith Cooper, don't give them a chance. They're either being crowded out by less talented supporting players or left to try and make the most of horrible dialogue and horrible, HORRIBLE character development (I almost gave up when we got the reveal about the recipient of Kelsey's text messages). Rutherford and Fatone are also okay, although the former is made almost unbearable by the writing.

Is there anything else though? No. Everything else is either bad or laughably bad, from the music to the editing to the twists and turns of the plot. It would be barely acceptable as an episode of a bad children's TV drama, which it most closely resembles, but it's almost beyond belief that people worked on this every day and thought the final result would be an enjoyable feature film.

Tempted to watch it to see if it's really as bad as I, and many others, have said? Do so at your own risk. But don't come running to me if the end credits roll and you then run to the nearest pot of boiling mulled wine to throw over yourself in an attempt to boil away the memory of what you just endured.

2/10 (and anyone without my high tolerance for movie pain can easily half that score).

Treat yourself to this triple-pack instead.
Americans may want this pack. 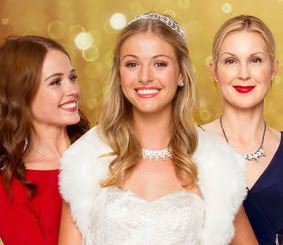