Yule Love It: The Flight Before Christmas (2008)

Directed by Michael Hegner and Kari Juusonen, and written by Marteinn Thorisson, Hannu Tuomainen, with additional dialogue from Mark Hodkinson, The Flight Before Christmas is, let’s cut to the chase here, pretty bad. Even when you compare it to other movies made for children, it doesn’t hold up well.

The story revolves around Niko, a young reindeer who is convinced that he can fly, despite also having some bad vertigo. His father was one of the flying reindeer that help Santa on his travels, or so he believes, and Niko sets out to meet him, accompanied by his friend, Julius (a flying squirrel). They make a friend along the way, a weasel named Wilma, but also have some dangerous wolves following them on their journey. The leader of the wolves has a plan, and it involves eating some reindeer AND Santa.

There's nothing here to make The Flight Before Christmas memorable, there's barely even enough here to put into a full review. It's an animated film for younger viewers that pales in comparison to many other choices you could have available. If you're ever wanting to stick on something snowy and charming to distract children then I would recommend any of the Rankin/Bass creations before this, which already gives you a handful of options before even considering Disney fare or other cartoon specials.

It's the animation that allows this to stand out, and not in a good way. This is a poor piece of work that feels either inept or lazy, with the characters designed and moving as if they just stepped out of a 16-bit games console. And the environments they are placed in never feel like more than backgrounds, giving the whole thing the look of one of those books that you placed stickers in to make a story.

The script isn't great either, although it hits all of the expected notes. There's just nothing done to make this more magical or fun, despite a couple of moments in the finale that at least provide a predictable and satisfying conclusion to events. But anything actually decent is hampered by the technical shortcomings and seeming lack of care.

Very young viewers WILL enjoy this, it's at least perfectly pitched at their level in terms of the simplicity of the storyline and ideas, but you can forget about it once they've experienced some of the better seasonal treats and have started to become even the tiniest bit more discerning. 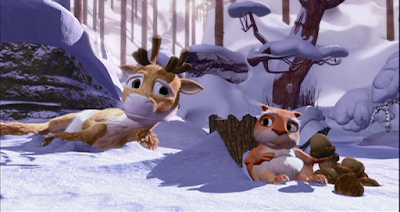