If you don't already have Desk Set marked off your list of Christmas movies that you have seen and enjoyed then, take a cue from me, change that now. Admittedly, it's easy to look at it as nothing more than another excellent pairing of the wonderful Katharine Hepburn and Spencer Tracy but all of the festive trimmings are on display, and the script includes both some fun references to common Christmas trivia questions and also some main gifts that prove to be very relevant to the plot.

Hepburn plays Bunny Watson, the head of a reference section in a television network building. She answers calls, as do her staff, and prides herself on the wealth of knowledge that they can get a hold of, often due to the fact that they have a head start with their experience and particular skills. Tracy plays Richard Sumner, a man who has been called in to get the measure of the place and install a computer. All of the women working in the department immediately start worrying about their jobs, yet Hepburn and Tracy start to enjoy each other's company, despite seeming to view the main job being evaluated from very different angles. Hepburn also has a boyfriend (Mike, played by Gig Young) who seems to have taken her a bit for granted for too long, but maybe he needs to make more of an effort now that someone else may be taking an interest in her wonderfulness (and was Hepburn anything less than utterly wonderful? I don't think so).

Written by the husband and wife team of Henry and Phoebe Ephron (yes, they also had children, including one named Nora, something I may mention every time I reference their work, apologies), Desk Set is a delight from start to finish. The opening scenes have Tracy being amusingly eccentric as he sizes up the building and workspace, introduces the female characters who make up the reference section, and then quickly set him up as being rather at odds with Hepburn, and everything moves on from there in a set of great exchanges and set-pieces (with highlights including Tracy and Hepburn having a dinner together that is interrupted by Mike, an exuberant Christmas party, and an inevitable finale that tests the computer against humans). It may be based on a play, written by William Marchant, but the fact that it feels just set-bound doesn't really matter when the dialogue and performances are as good as they are.

Director Walter Lang may not equal his personal best work here (and The King & I is a tough one to top) but he doesn't get in the way of that chemistry that made pretty much every Hepburn/Tracy movie so much fun to watch. Things are kept simple, so simple that I am surprised it runs for just over 100 minutes, and that was obviously the best choice for the material.

All of the cast do well, although it's easy to overlook them when being kept so mesmerised by the star central pairing (who are, it goes without saying, on great form). Young has the unsympathetic role of the unappreciative boyfriend, and he's perfectly misguided and cocky in his role, while Joan Blondell is also highly entertaining as the main staff member, Peg, who you feel could easily run the department during any times Hepburn has to be absent. Dina Merrill and Sue Randall are the other ladies who may soon find themselves out of work, and Neva Patterson does some great work in her small role as the woman coming in to give the computer a test run once it is in place.

Full of laughs, and with many moments that arguably resonate today even more than they did back in 1957, Desk Set is a sweet and sharp near-classic that should please fans of the leads.

You can buy a set for yourself here.
Americans can buy it here. 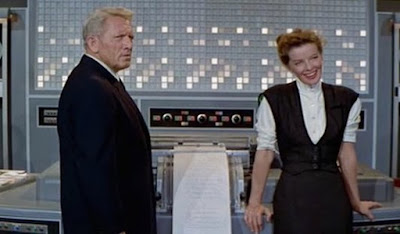