A horror film that plays out in the found footage style for the most part, Frost is a strange, and ultimately unsatisfying, mix. It tries to do something a bit different, fair enough, but the execution of the material is so crushingly dull that any of the better moments are weighed down by the bad stuff.

Anna Gunndís Guðmundsdóttir plays Agla, and Björn Thors plays her partner, Gunnar. The two wake up one morning to find themselves completely alone in the glacier camp that is their place of work. Everyone is gone. Is it a prank, or is something more mysterious going on? Some strange things soon start to occur, adding up to paint a sinister picture.

Directed by Reynir Lyngdal and written by Jón Atli Jónasson, there are enough elements placed here for the potential enjoyment of others that I’ll have to try and remain vague. Unfortunately, some of the more intriguing aspects of the film are left too underdeveloped or ambiguous, while the more obvious moments are marred by the ugliness of the camerawork and shot choice (for that proper cinema verité style). Frights are jump scares, with some of them being more effective than others, and there's something about the way the main characters are in and out of the freezing conditions that somehow undercuts any attempts to create a spooky atmosphere.

Guðmundsdóttir and Thors aren't bad leads. They do decent work and display a relationship that feels fairly grounded and realistic, for the most part. But they aren't captivating or interesting enough to make up for the weak script. I wouldn't be able to pick either of them out of a line-up, although that's partially due to the fact that they spend a lot of the movie wearing thick clothing and protection against the elements.

When I pressed play on Frost I felt, somehow, that I might be stumbling upon a little gem. I hadn't heard any praise for it, but I also hadn't heard anything negative about it. I just hadn't heard of it at all (a relatively rare occurrence for me, if I say so myself). It turns out that not hearing about Frost is something that will continue to happen because there's not much to say about it. It's neither impressive or entertaining enough to recommend, nor is it incompetent or derivative enough to expend energy on while you laugh and roll your eyes.

Do yourself a favour, give it a miss, and go seek out the Cold Prey trilogy instead. You may even thank me for it.

Frost can be bought here. 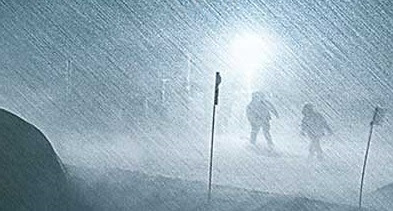