Everyone knows, despite what Christmas SHOULD be about, that the holiday season often ends up being one that is full of stress, obligations, and tensions that can rise to the surface and turn into arguments when everyone had had one or two drinks too many. Secret Santa takes that atmosphere, the family dinner with everyone ready to bring up long-held grievances as they do their annual duty, and ramps things up to an amusingly excessive level.

A Leslie Kies plays April, a young woman dreading the family get-together. She's taking her boyfriend (Michael Rady) along with her for moral support, but it's going to be a tough time for everyone. April has a mother (Debra Sullivan) who can barely create one sentence that doesn't contain at least a subtle dig, a sister (Ryan Leigh Seaton) who seems very jealous of her, a slightly withdrawn brother (Drew Lynch), and a stepbrother (Nathan Hendrick) who has brought along a girlfriend (Michelle Renee Allaire) he  has been dating since meeting in a strip club. There are a few other family members there, but that's the core group I'll namecheck in this review. As things start to turn more overtly nasty around the dinner table, with resentment and insults being passed around in all directions, violence soon erupts. And things just get worse and worse. It's almost as if something has happened to make everyone lose any sense of self-control at the worst possible time.

Written by director Adam Marcus and Debra Sullivan (which may be why she managed to get so many great lines of dialogue, although many of the leads get some gems), Secret Santa is a horror comedy with the emphasis very much on the comedy. Those seeking actual scares or an abundance of gore will be disappointed, but it's still very much a horror film in terms of the violent eruptions and general bloodshed (and there are some amusingly abrupt and impressive kills). The pacing is perfect throughout, as is the mix of the comedy with whatever level of discomfort is being played out onscreen.

Direction from Marcus is also very good. The film doesn't look as if it has the biggest budget ever, unsurprisingly, but Marcus tries hard to distract you from that. Moving outside the house for a while stops it from feeling too restricted to that one location, the money has been used to ensure that the effects work is top notch, and the script does the rest of the work, carrying viewers smoothly and quickly through a Christmas time that starts off feeling like your normal stressful seasonal experience and ends in a much more extreme place.

Kies is a decent lead (although this is very much an ensemble piece), and I've already mentioned Sullivan getting to deliver some great lines, but it's impossible to nominate one of the cast members ahead of any of the others. Seaton is hilarious bitter throughout, Lynch (a familiar face to anyone who has seen clips of his comedy routines online or on TV) is sweet and funny, and Hendrick has an absolute blast playing his hyped up asshole character, who still somehow remains quite likeable and entertaining before everything goes south.

Secret Santa is a perfect antidote for those sick of the deluge of schmaltzy TV movies available at this time of year. It's not interested in being cheery, it's not wanting to teach you any morality lesson (well, beyond the obvious one of maybe not resenting your family members so much that you want to violently attack them), and it seems to wink at viewers and say "yes, this time of year can be as awful as it is wonderful, but grit your teeth and we'll get through to the end together." I had a blast with it.

You can pick up the DVD here.
Americans can pick it up here. 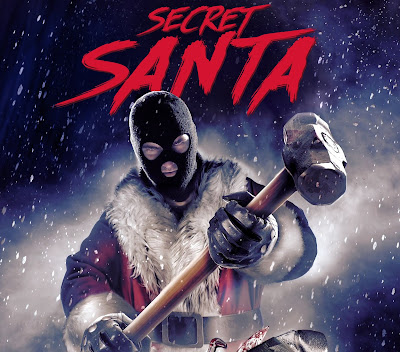