If you like to go into movies knowing as little as possible about them then do skip this review until you've seen Mercy Christmas. I always do my best to avoid spoilers but in summarising this film I'll probably be revealing one or two details that work better for people who don't know they're coming. That's how I viewed the film, not really knowing anything else about it beyond the title, and that's how I recommend experiencing it.

Steven Hubbell plays Michael Briskett, a bit of a doormat who ends up being handed an extra workload by his boss (Andy, played by Cole Gleason) when he just wants to get ready to enjoy the Christmas break. He even has a small party planned, although nobody turns up to it. Well, nobody turns up to it until Cindy (Casey O'Keefe) arrives. Cindy is the new assistant to Andy but, unlike the boss man, she seems very nice. Although she doesn't seem quite so nice when Michael wakes up in a basement beside other people who have been drugged and kidnapped. Christmas dinner is always a big deal, and Michael and the others trapped with him are being eyed up as very special ingredients.

The directorial feature debut of Ryan Nelson, who also co-wrote the script with Beth Levy Nelson (sorry, I couldn't find out if they were related or married or just carriers of the same surname), Mercy Christmas is a fine blend of the darkly comedic and the macabre. Considering how many of us overstuff ourselves during the festive period anyway, it doesn't take a huge leap to think of how things would go for a family of merciless cannibals. There isn't a massive amount of bloodshed, but there's enough to remind you that this has one foot in the horror genre, and Nelson wisely chooses to avoid dwelling too lasciviously over any of the more traumatic "ingredient prep".

The comedy comes from a few different angles. You have the standard office worker being taken for granted by his douchebag of a boss, you have the standard traditions of Christmas made strange and amusing with the cannibalistic appetites on display, and you also get some extra tension that often twists into comedy when one family member decides to introduce his loved one to the others.

Hubbell is decent in his role, he's likeable enough and you spend the movie hoping that he gets out of his predicament, and Whitney Nielsen and D. J. Hale also do well playing two of the other victims, but it's Gleason and O'Keefe, as well as David Rupprecht and Gwen Van Dam, who have the most fun, portraying four of the main sextet of meat-eaters.

It's rough around the edges, certainly, but everything hits a required basic standard when it comes to the technical aspects (although I'll be damned if I can remember one snippet of the soundtrack right now). If you can look past that lack of polish then you may find yourself consistently entertained, as long as you have a similar sense of humour to me and can laugh at arguments between cannibals over cooking times, someone being mildly electrocuted by Christmas lights, and the harmful power of someone who is very angry while holding an iron in their hand.

You can buy Mercy Christmas here.
Americans can get it on blu here. 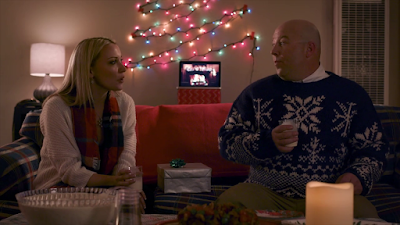