Yule Love It: Shoelaces For Christmas (2018)

All of the pieces are in place here for a traditional slice of Christmas fare, and I'll start this review by admitting that I thought I had something in my eye during one or two moments of the third act of this. You've got a parent diagnosed with cancer, a homeless shelter with residents who may very well teach the lead character a thing or two about how to be less selfish, and a child who doesn't speak. Enough to melt even the coldest heart, surely.

Mia Topalian plays Jennifer Miller, who starts the movie as a typical teenage girl, happy to join in with her friends as they deride others and very self-centred. This doesn't immediately change when her father (Bailey Chase) and mother (Jessica Morris) break the news that her mother has cancer. Appalled by the lack of concern for anyone other than herself, Jennifer's father eventually lays out a plan for her. She will be helping out at a shelter for the homeless and generally working on becoming a more helpful individual, or she won't get that holiday trip to Paris with her friend that she has been looking forward to for so long. It's at the shelter where Jennifer meets the young Chloe (Summer Mitchell), who doesn't speak. The two start to bring out the best in one another, maybe just in time for a Christmas "miracle".

Director Craig Clyde keeps this a fairly bright and breezy seasonal film, thanks to the script, that he co-wrote with Bryce W. Fillmore, and decent enough cast (for this type of thing). The first third is fun, watching Jennifer be the kind of spoilt teen that needs the kind of lesson about to be taught to her, and the rest of the film works nicely through a number of tropes that viewers expect from this type of thing.

Topalian does a good job in the lead role. The script helps, keeping her sympathetic even while she's being a bit of a "mean girl", but she also has good presence, making her a great lead to follow through this familiar journey. Chase and Morris are fine as the parents, Mitchell plays her role with the appropriate big eyes making up for a lack of dialogue, and Paul Kiernan is fun as Vinegar Ben, someone who doesn't view Jennifer in a good light at all . . . until the two eventually warm to one another as Jennifer starts to move away from being so self-centred.

I've seen a couple of Christmas movies that I've enjoyed lately, which makes it time for the standard reminder that rating these as above average or good doesn't necessarily mean they should be viewed that way in comparison to non-holiday movies. This was a sweet TV movie that nicely mixed the sad with the uplifting, and I recommend it for this time of year.

Here's a great selection of Christmassy movies for the family to enjoy.
Americans can get it here. 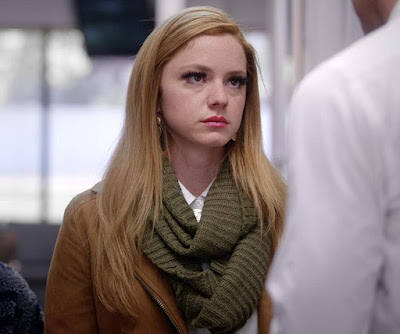