When I watched the trailer for The Babadook I was worried that I'd figured out what the whole film was about. In fact, I thought the trailer was just one big spoiler for those who could figure out one or two possible directions for the movie. I was slightly wrong, but only because writer-director Jennifer Kent never seems sure of what direction to take the movie in, at any point.

The film focuses on a struggling mother, Amelia (Essie Davis), and her difficult son, Samuel (Noah Wiseman). Amelia lost her husband, Samuel's father, in a car crash that occurred before Samuel was born, which has led to her grieving ever since. Samuel realises this, of course, and veers between unconditionally loving his mum and also mourning for a father that he never knew. So when the two start being spooked by the titular babadook, it doesn't take long for their fragile minds to look ready to crack wide open.

Lots and lots of people will line up to tell you that The Babadook is one of the best horror movies to be released in recent years. I'd certainly advise at least giving it a watch, because I seem to be in a minority with my dislike of the thing. For me, the main characters never felt even remotely likable (not always a necessity, but helpful when dealing with such dark material), the scares weren't all that scary, and the psychological layering just didn't do enough right to make up for so many wrongs.

Davis and Wiseman are both very good in their roles, with the latter particularly impressive, especially during the second half of the movie, but they're given very little to work with. Davis has to act like a woman getting down to her last frayed nerve, and she does, while Wiseman is either wandering around like a grimy orphan or being as aggravating as possible. Whatever explanation you go with, and the film indulges itself in allowing for pretty much any interpretation, the actions of the main characters just don't seem to make sense. Daniel Henshall has a few scenes, and is a welcome presence, and there are some other peripheral characters, but this is mainly about Amelia, Samuel and the babadook.

Kent shows that she's got talent, especially in the many scenes overtly showing the effects of deteriorating mental health, and it's always good to see another rare horror movie released that seems aimed squarely at adults, yet that also makes it more disappointing that the end result is such a squandered opportunity. The visuals are impressively dark and messy, as is the tone. Unfortunately, both start to work against one another, grinding up the thin characters in between them.

Worth your time? Yes it is. The modern masterpiece that many are calling it? Not for me, obviously, but you may find yourself agreeing with them. I'll just stand in a corner, glaring at people, muttering, and making rude hand gestures. As usual. 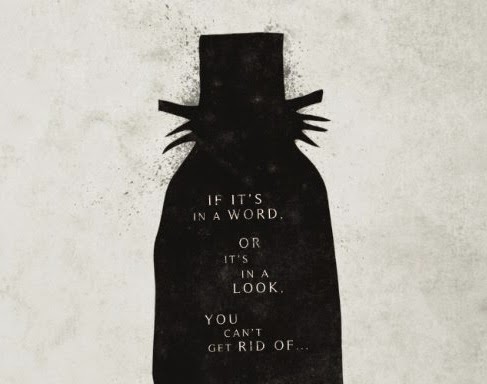