Directed by Howard Hawks, and with a cast that includes Humphrey Bogart, Lauren Bacall, Martha Vickers and Elisha Cook Jr, The Big Sleep is a movie that I'm sure many could automatically rate as an outright classic. And it is one. Having said that, it's not perfect, with the main weakness seeming to stem from the source material (by Raymond Chandler). Perhaps I'm being slightly blasphemous, but there's never any real sense of danger here, or even anything that crops up in the second half of the film that causes you to care any more about how things will turn out. Of course, that's partly because everything is set up so brilliantly in the first half, with great characters given great dialogue.

Bogart is Philip Marlowe, that most famous of American private detectives. He starts to get himself into trouble, as usual, when hired by an elderly man (General Sternwood, played by Charles Waldron) to investigate a case of blackmail. The old man has two daughters, one a bit of a wild child (Vickers) and the other a real tough cookie (Bacall). Marlowe wants to ensure that neither one ends up being the focus of any unwanted attention, but he soon ends up with a corpse or two added to the mix, at least one missing person he wants to track down, and some heavies intent on stopping him from sticking his nose where it doesn't belong.

Hawks is a good director, as fans of classic cinema already know, but it's hard to appreciate his craft when the leads are stealing your attention throughout the movie. The script, by William Faulkner, Leigh Brackett and Jules Furthman, absolutely crackles during every exchange of dialogue. I can't think of one major scene that doesn't have some eminently quotable lines in there. It's just a shame that it can't remain as pitch perfect when it comes to the twists and turns of the plot, and the resolution. The climax, in particular, feels a bit rushed and, well, anti-climactic. Perhaps that's because the case itself doesn't have too much to interest the viewer, or perhaps it's inevitable after so many great scenes filling up the rest of the runtime.

Bogart is brilliant for every second that he's onscreen, as he so often was with this type of role. Tough, verbally dextrous, smart, and cynical. Bacall matches him almost every step of the way, although her character does have weaker moments, as the plot demands. Everyone should know by now that the two have a chemistry together you can't manufacture so the real surprise comes from seeing how much fun occurs when Bogart shares scenes with Vickers (who is wonderful), the gorgeous Dorothy Malone (not in it for long, but long enough to make an impression), or Sonia Darrin. Waldron is very good in his relatively small role, Elisha Cook Jr. pops up for a few scenes, and John Ridgely makes for a decent antagonist (but is he a villain or a red herring?).

It's not a perfect film, not to me, but it comes close. Very close. 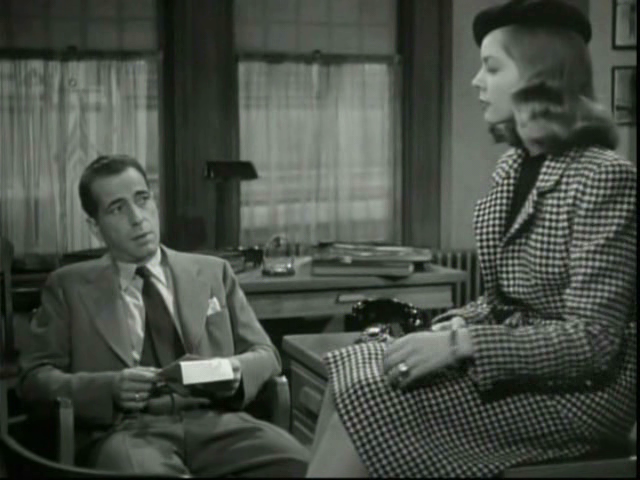