Bad Influence is your standard neo-noir/psychosexual thriller movie. One suave young man is caught under the spell of a gorgeous creature, starts to act out of turn, is transformed, and finds himself going down a very dark path. It just so happens that the man being transformes is James Spader, and the gorgeous creature bewitching him is Rob Lowe. Yes, Rob Lowe is, essentially, a femme fatale in this slick, enjoyable thriller from the very start of the 1990s.

Spader plays Michael, a young man who is just about keeping everything together. He has a good job, but it's one that sees him constantly being usurped by his main colleague (Tony Maggio). He has a lovely fiance (Marcia Cross), despite not being sure about the whole marriage thing. And he has a brother (Christian Clemenson) who keeps turning up whenever he needs helped. Basically, Michael is a bit of a doormat. That all starts to change when he meets Alex (Lowe), a young man who goes through life intent on breaking rules and doing whatever he feels like. As the two seem to grow closer, Alex decides to help Michael out. He just doesn't let Michael know in advance, and his methods are far from traditional. It's hard to imagine the two being able to stay friends. It's even harder to imagine Alex not being allowed to do whatever he wants any more.

Written by David Koepp and directed by Curtis Hanson, this remains a daft, glossy product of its time. I'm not going to pretend that it's an incisive, deep, intricate piece of work, that's not what it aims to be, but I will say that it sketches out everything nicely enough, has some fun taking potshots at the kind of people and lifestyles that would be so brilliantly targeted in American Psycho, and isn't afraid to get darker and darker on the way to a satisfying final act.

Spader does his slightly nervy act again, growing in confidence as the movie plays out, and he's as good at it as ever. Lowe gets to have the most fun, however, as he uses his perfect, handsome face to hide the cold, calculating mind of a dangerous sociopath. Cross does well in a pretty thankless role, Maggio is an enjoyable douchebag, Lisa Zane is an attractive woman who ends up caught up with Michael and Alex at a very unfortunate time, and Clemenson is fine in a role full of easy tics and beats.

It's almost completely predictable from start to finish, but sometimes that's the fun with movies that set out to simply entertain us. Watching how things unfold (and, don't get me wrong, there ARE one or two surprises) is no less enjoyable just because we know the main plot points that will crop up. Will you remember Bad Influence years after you watch it, and will it become a steadfast favourite? That's unlikely. You will, however, enjoy the movie while it's on, and perhaps even revisit it further down the line. Maybe. 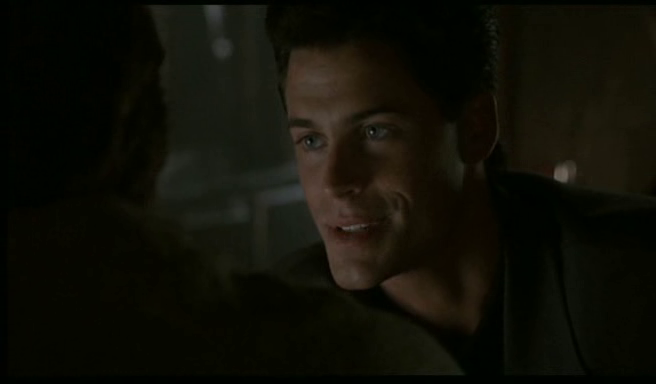