After mulling it over for a while, I have decided that Willow Creek isn't the worst film I've seen in some time. There are positives to note. Unfortunately, much like the Bigfoot-hunters it takes a cue from, you really have to dig around until you uncover those positives.

Written and directed by Bobcat Goldthwait, this is a found footage film about a couple who are looking for Bigfoot. They're not completely obsessed. Jim (Bryce Johnson) believes that he could look for some interesting evidence at a well-known hotspot, whereas his girlfriend, Kelly (Alexie Gilmore), just goes along with him for the fun of it. But the fun doesn't last for the whole journey. In fact, a night spent in their tent might just prove to be more terrifying than they could have ever imagined.

Unfortunately, what I've just described above doesn't necessarily translate into an exciting, tense experience for viewers. The biggest problem with Willow Creek is that it's just so damn boring. Anyone who thought The Blair Witch Project was dull needs to steer well clear of this. Goldthwait, to his credit, does his best to maintain consistency of style throughout, and he also sprinkles a few nice details and moments of foreshadowing here and there, but there's very little he can do to compensate for the many scenes that just feel unnecessary and drawn out.

The sequence showing Jim and Kelly reacting to activity around their tent is very well done, with all of the tension created by noise and suggestion. Sadly, it can also be viewed as a bit of a cop out by someone who seems to be enjoying stretching a dollar way beyond breaking point.

Johnson and Gilmore both do well in the main roles, and it's refreshing to see this kind of movie that doesn't just name the characters after the main actors, and they're likeable and believable enough, for the most part. A few other faces pop up onscreen to provide more backstory/context, but it's mostly down to the two leads to carry the whole thing, which they try their best to do.

That's about all I can say about this film, however, because it's about as paper-thin as you can get. As well as the usual flaws that so often crop up in found footage films - with the biggest being a sense of amazement at anyone who keeps a camera filming during any of the more stressful moments - we get a real lack of anything that feels like a reward for viewers having such patience. Perhaps this is deliberate, maybe the entire movie is delivering an experience akin to being an actual Bigfoot hunter, with all of the frustration and disappointment that entails.

Or maybe it's just a bad movie. 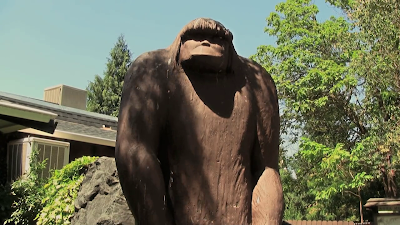 As much as I love the rest of the world, I can't keep up with all of the different links in different territories, but trust me when I say that it should be there on your local Amazon.
Posted by Tylerandjack at 17:00