Written by Christopher McQuarrie, who also decided to make it his directorial debut, The Way Of The Gun is a non-stop assortment of fantastic moments. It is, in fact, a minor modern classic, all too often overlooked in favour of movies that are deemed to have a better pedigree. Considering this film has James Caan in one of his best roles, and a nice turn from Geoffrey Lewis, with two great lead performances from Ryan Phillipe and Benicio Del Toro, I urge everyone to reconsider their opinion of it.

Phillipe and Del Toro play Mr. Parker and Mr. Longbaugh, respectively. They're not good men, as is made clear in perhaps one of the greatest opening scenes in the past 20 years. Drifting along, making money from selling various body fluids (another great scene shows them at a sperm bank), the two men overhear a conversation that starts them thinking about a big score. It turns out that a rich man (Scott Wilson) is about to be given a child by a surrogate mother (Juliette Lewis). Until she delivers the baby, the mother is very valuable indeed. She's being guarded at all times (by Taye Diggs and Nicky Katt), but that won't stop them from pulling off an impressive heist. Or so they hope. Can they manage it, and can they then negotiate themselves a fine payday without too much further trouble?

Full of great humour, resonant dialogue, and a number of great twists and turns, The Way Of The Gun showcases just what a great talent McQuarrie is. He can create cool characters and situations, and he loves to work some grittiness into the material, but he also allows for a layer of warmth that adds to the appeal of almost everyone onscreen. These are movie characters, but they're still allowed to be human.

Despite strong competition, I consider the two central performances here to be career-best turns from both Phillipe and Del Toro. Both work brilliantly in their roles, whether separately or alongside one another, and part of the brilliance of the screenplay is the way in which McQuarrie places them out of their depth without ever making them stupid. Watch their tactics, and listen to every line of dialogue, and you'll soon realise how smart they are. Diggs and Katt are also not stupid. They just happen to find themselves outwitted by an audacious move. Mind you, it takes time to figure out if they're better or worse than the characters played by Phillipe and Del Toro. Lewis is pretty good, although she's required to be the most vulnerable of all the characters onscreen, obviously. Baby bump or no, she has moments in which she gets to show how determined she can be when it comes to protecting her child. But I'd have to say that the scene-stealer of the movie is the mighty James Caan, putting in a performance here that hints at what may have become of Frank, the character he played in Thief. I'd put this up there as one of his best turns, perhaps even second only to his work in the aforementioned film. His scenes with Del Toro give the movie a beating heart, while his scenes with Geoffrey (yes, father of Juliette) Lewis highlight the cynicism and weariness that inevitably take over anyone who continues to work in a world constantly being invaded by the young. Dylan Kussman is the other main player, and does just fine as the doctor hoping to keep his pregnant patient from harm.

There are many moments here that feel cinematically cool, but they rarely feel as if they're shoehorned in there JUST to be cool. Even those, fairly unnecessary, opening scenes serve to set up the characters and the world that they inhabit. And how can you hate anyone who comes up with the colourful phrase: "Shut that cunts mouth or I'll come over there and fuckstart her head!"? It's profane, yet equally hilarious for the way it immediately makes jaws drop.

Is everyone going to love this movie? No. But I firmly believe that they should. McQuarrie is a talented writer-director (I also highly recommend Jack Reacher if you've not yet seen it) and I look forward to what he's yet to show us. It may not equal this debut, but he's failed to disappoint me yet. 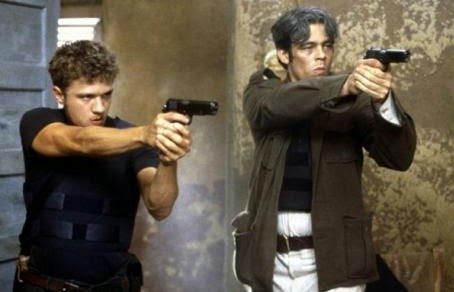