A tale of death, friendship and black-market trading, The Third Man is a classic mystery thriller that uses a decent script, a great cast, and an evocative location, and creates something that ends up being more than the sum of its parts.

Joseph Cotten plays Holly Martins, a pulp novelist who travels to post-war Vienna to visit his friend, Harry Lime. Unfortunately, when he arrives he finds out that his friend has recently died. And then he finds out that a bunch of people thought he was mixed up in some criminal activities. Not willing to stand around and see his friend's name dragged through the mud, Martins starts to investigate the death. He soon finds out that there may be more to it than just a tragic accident.

Written by Graham Greene, this is a smart film that unfolds at a leisurely pace. Director Carol Reed uses his cast to great effect, simply allowing them to have their conversations and relay information in ways that manage to somehow seem both unfussy and yet never dull. That's due to the fact that the central characters are all nicely fleshed out, with more than one having a secret or two up their sleeves, and also down to great dialogue that spends a lot of time teasing viewers with intriguing details and hints of something being amiss before some great reveals in the second half.

Cotten makes for a likable lead, whether he's arguing with officials (mainly the Major played by Trevor Howard) or finding himself draw to a woman (Alida Valli) who has feelings for Lime. Despite being the main obstacle as Cotten conducts his investigation, Howard still manages to avoid becoming some kind of obvious villain of the piece, helped in no small part by a supporting turn from Bernard Lee (as a Sergeant who enjoys reading Martins' books). Valli is lovely, and her character has a real core of sadness that becomes more and more apparent as things play out. And then, last but not least, we have the man himself. Mr. Orson Welles. He's fantastic, and gets to make the most of his relatively limited screentime with some truly wonderful lines of dialogue, including one great speech that he came up with himself.

There are two other main characters worth mentioning. One, the setting. Made to appear both beautiful and mysterious and home to oh-so-many shadows, Vienna is both a wonderful setting for the events, and also integral to the plot development. Two, the music by Anton Karas. If you don't think you're aware of it then think again, The Third Man Theme (AKA The Harry Lime Theme) has to be, arguably, the most famous tune ever played on a zither. Even those who have yet to see the movie have, probably, heard at least a snippet of the main theme.

A sedate, intelligent thriller for those more interested in characters and morality than chases and cliffhangers (although it delivers some standard thrills in the finale), The Third Man is a film that won't lose its reputation as a classic any time soon. The pacing could be better, with some sections feeling slightly drawn out and one main section feeling slightly rushed, but that's a very minor criticism when considering how much greatness you get to experience in one sitting. Those characters, that music, those shadows, those camera angles. Just wonderful stuff. 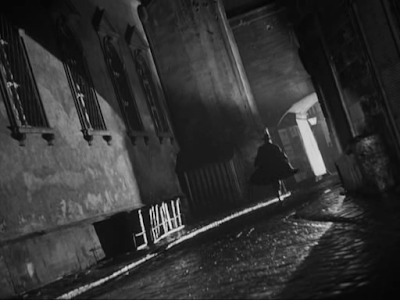