Adapted from the novel by Charles R. Jackson, The Lost Weekend is a sensationalistic noir from director Billy Wilder, who also co-wrote the screenplay with Charles Brackett. It's about alcoholism, focusing on a man who already seems to know that he's happiest when at the bottom of a bottle, and there are plenty of obvious touches throughout the film, but when it hits the nail on the head, particularly during the final reel, it remains one of the best studies of alcoholism/addiction fuelled by disappointment and self-destruction that I can think of. Pair this up with Leaving Las Vegas and you'll never be tempted by the demon drink ever again.

Ray Milland is on top form as Don Birnam, the man who has almost everything that his heart could desire, were it not for the fact that his heart always desires one more drink, and then one more, and another one to chase it down. His brother (Phillip Terry) is set to take him away for a weekend that should help him dry out and recover, and the woman in his life (Helen St. James, played by Jane Wyman) is also supportive as he tries to mend his ways, but a thristy stubborn streak turns the whole plan on its head. While his brother and Helen head out for a while, Don takes the opportunity to purchase some alcohol and spend some time in a nearby bar. And then he just tries to keep swimming further and further into whatever pool of alcohol he can get his hands on.

What starts off as a relatively light, fun movie soon turns into something extremely dark, yet Wilder uses the dimmer switch so expertly that many viewers may not feel the true impact of the whole thing until they've had the room lightened again. The script and cast are both a huge help, but there's a lot to be said for his perfect balancing act. Too dark and the whole thing becomes unbearable, too light and it's meaningless.

Milland may show off all the tics and twitches that you'd expect in his role, but he excels in the scenes that show his desperation for another drink, at any cost. This is a character who can pretty much justify every action, no matter how far back he has to stretch, and Milland mixes in cruelty, remorse, cunning, and a healthy dose of pathetic. Wyman, on the other hand, is simply sweetness throughout. The relationship between the two may seem unlikely, yet it never seems completely false, especially as flashbacks show Milland hiding away his drinking habit in the early stages. Terry is very good, Howard Da Silva is a bartender who gives Milland a justifiable bit of attitude, and Doris Dowling is extremely likeable as a happy-go-lucky gal who has a bit of a crush on a man she doesn't see as he really is.

Powerful, at times uncomfortable, incisive and thought-provoking, The Lost Weekend shows just what a slippery slope any major addiction can be, somehow managing to avoid sensationalism and clumsy shock moments for the majority of the runtime. I consider it pretty much essential viewing, especially as a sobering (pun intended) look at the potential dangers of alcohol dependence. 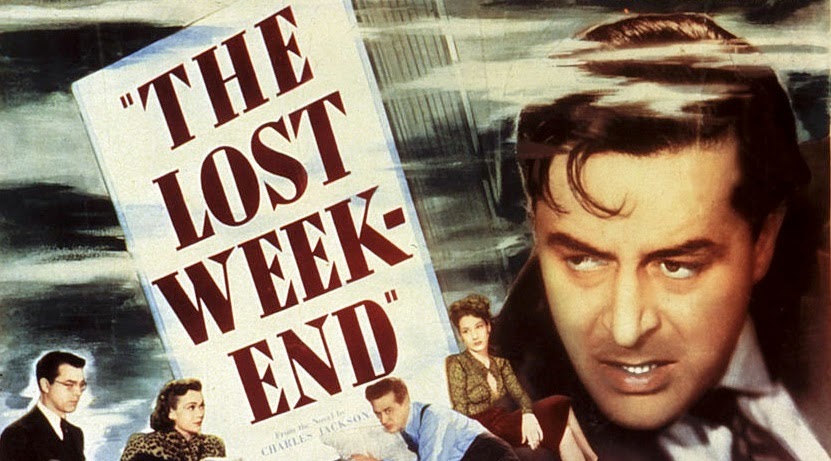