Even dumber than you probably expect it to be, Into The Storm is, funnily enough, a weather-related disaster movie, with the extra gimmick of many scenes presented in the style of real footage captured by those in the middle of events.

Pete (Matt Walsh) is a storm chaser. He's got a team working with him (including a meteorologist, played by Sarah Wayne Callies), a vehicle that can withstand MAJOR winds, and the willingness to endanger everyone around him for the sake of some great footage. Unfortunately, he's not been getting close to any storms. That all changes when a number of tornadoes spring up, causing a lot of damage and signalling some even worse weather heading their way. Oh, and there also happens to be a graduation ceremony at a local high school, meaning that a lot of teenagers could also find themselves in peril.

Taking a formulaic plot structure, Into The Storm has occasional moments of spectacle to make it worth a watch, but very little else to recommend it. The direction from Steven Quale is pedestrian, at best, and the script by John Swetnam is ridiculously underdone, even for this kind of stuff. One or two characters stand out, but they're not necessarily the ones that you're rooting for. And as for the schoolkids, just forget it. Even the two or three that are given the chance to be the focus of the movie for a number of scenes are eminently forgettable.

Nathan Kress and Max Deacon are the two young actors stuck with characters that the audience won't really care for, Alycia Debnam Carey is the young actress also stuck with someone that nobody will really care about, and Richard Armitage plays a Vice Principal who also happens to be the father of the two boys. Yes, you guessed it, it's hard to care about him either. Callies does better in her role, but even she plays a character that it's hard to care too much about. It's not her fault, it's just an automatic reaction to a script that goes for the most obvious tricks in a heavy-handed manner, causing some (well, me, at the very least) to dislike the characters as they should be warming to them. Prime example - the scene with her talking on the phone to her daughter. The young daughter that misses her lots. See, you can't possibly want her to be endangered by freak meteorological events because SHE HAS A YOUNG DAUGHTER. If that doesn't make you care more for her then you're a heartless bastard, I guess. That's what people call me anyway. Walsh is the most fun, but as he's playing a bit of a selfish ass it's also difficult to care too much about his fate, particularly when so much of the third act is highlighted, underscored and covered in neon lighting during the first act of the movie. Mind you, at least that obvious foreshadowing is fun. I'll give 'em that.

There are some great special effects on display here, and viewers should be kept relatively entertained if they view the film as nothing more than a chance to see how well a computer can create tornadoes onscreen (which was obviously the whole raison d'être of the thing anyway). Given the choice, however, I would rush to rewatch The Day After Tomorrow instead. Heck, I'd probably put up with 2012 over this. 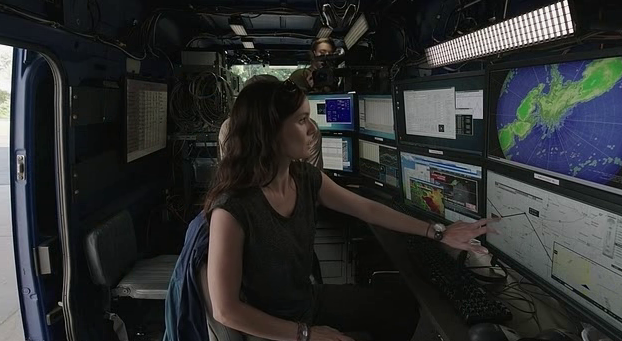