I mulled this one over, I mulled it over long and hard. This little movie has a lot of little flaws, and I'll be mentioning them in this review, but it also has a lot of heart. Heart might be the wrong word. It might be best to say that the movie, like the main character, just seems full of tenacity. It's got a quality that keeps powering it along, allowing it to drag itself upwards to become something worth your time.

Stripping down the plot to the basics, it's simplicity itself. A woman (Tank, played by Nicole Alonso) has to keep crawling through ever-tightening tunnels to stay ahead of a creature that's following her. The creature will kill her if it manages to get hold of her, so the situation is life or death. There's more to the movie than that - mainly, a mission that involves Tank and a few others transporting the last fertile woman alive through the same tunnels - but that's really the gist of it.

So, it's a 90-minute movie, or thereabouts. It's a creature feature. It has very few main characters. This means that, perhaps inevitably, there are moments when the movie outstays its welcome. Thankfully, although it may seem strange, those moments come in the first half of the movie. When we first meet the main characters it's hard to care for any of them, they're just too underdeveloped and the reality of their situation only starts to sink in when viewers spend more and more time accompanying them through the tunnels.

Writer-director Oklahoma Ward knows where he wants to take things, but those opening scenes don't bode well. Dialogue feels a bit clunky and irrelevant, and you may start to wonder how you're expected to spend the duration of the movie with those characters. Never fear, the tunnel itself is the main "character" given screentime, and as things get darker and more claustrophobic it soon becomes clear why those early scenes were needed. In fact, you may be yearning to revisit them when you start to struggle for breath in sympathy with the main characters.

Alonso does very well in the main role, mainly because she's brave enough to put herself in such an awkward position. I'm NOT majorly claustrophobic (although I'm not a huge fan of tight spaces) and I certainly can't imagine ever being able to put myself through what she obviously did for the sake of getting the movie made. Kudos to her, major kudos. I'll mention Torey Byrne, Tommy Ball, Will Crown, David Paul Baker and Tom Chamberlain, but they all just fill in for the times that don't focus on Alonso, the tunnel, and the creature.

Ah, the creature. That's a real mixed blessing here. First of all, let me say that the film also boasts some very impressive practical effects. I couldn't say what the budget was for this thing, but I'm guessing that it wasn't exactly mega-millions, and it's great to see that Ward knows how to stretch a dollar without filling up the screen with cheap CGI. It's just a shame that, from certain angles, the main creature looks a LOT like everyone's favourite xenomorph. The overall design has more of an insectoid quality, and that is shown at times, but the head and top half of the body will make you think of Alien as soon as you see it. There are worse movies to be compared to, but it's a bit of a distraction that could have been avoided.

Apparently, Ward has a trilogy planned. That explains away a few of the other minor criticisms I had planned to write about here, with some more backstory and character development lined up for future instalments. So I guess I'll just end by recommending this to genre fans. It's not a found footage film, thank goodness, and it's not another vampire/zombie/werewolf movie. It's trying to do something a little bit different. And, overall, I'd say it succeeds. 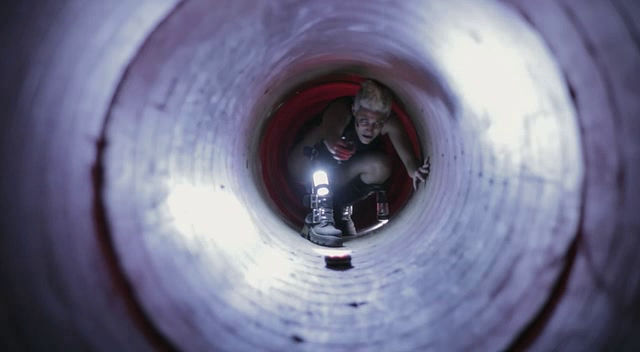 As much as I love the rest of the world, I can't keep up with all of the different links in different territories, but trust me when I say that it should be there on your local Amazon.
Posted by Tylerandjack at 20:00