When Sin City came on the scene almost a decade ago, it was unlike pretty much any other slice of cool that mainstream audiences had ever scene. Hard boiled doesn't even begin to cover it. Those visuals, those archetypes, and that cool dialogue all just clicked together into a great celebration of everything noir.

It's a shame that Sin City: A Dame To Kill For feels tired from almost the first scene. Reprising the same stylistic choices from the first movie - largely black and white, but with splashes of colour popping out here and there - makes it feel like little more than a complete rehash, with less interesting characters for us to hang out with.

The tales to be told this time around had the potential to be just as entertaining as the tales that made up the first movie. Eva Green is the woman of the title, and she's pretty much a perfect choice for such a femme fatale. She gets one tough guy (Josh Brolin) in her grasp, but he in turn enlists help from another tough guy (Mickey Rourke, reprising the role of Marv). The badass girls of the street also return (led, once again, by Rosario Dawson), and Dennis Haysbert takes over the role, Manute, that was previously played by the hulking Michael Clarke Duncan. Joseph Gordon-Levitt plays a lucky gambler who is out for revenge. And lots of people rub each other up the wrong way.

Archetypes. That's all we have here, yet again, but they're just not as much fun this time around. For every moment of Eva Green being ridiculously sexy and callous, we end up having to endure a scene in which Jessica Alba tries to act drunk and tough and angry (hint = she can't). Gordon-Levitt and Brolin are great additions to the cast, but the film doesn't do well enough by their characters to make their tales as satisfying as they should be.

I'm assuming that most of what's here onscreen is hewn as closely to the source material, by Frank Miller, as it was in the first movie. In fact, Miller gets a co-directing and co-writing credit alongside Robert Rodriguez. Perhaps such slavish devotion to the material only works when it's cinematically strong? Or perhaps it was inevitable that the strongest tales were picked for the first movie, leaving any sequel to feel like second-tier stuff. A disappointing, disjointed air also doesn't help, with the stories never feeling that tightly intertwined, but there are still enough individual moments to make it worth your time. Just.

The visuals are as gorgeous as ever, if you go with the stylistic choices, and there's also plenty of fun to be had in the sprawling support cast, which includes the likes of Bruce Willis, Juno Temple, Ray Liotta, Stacy Keach, Jeremy Piven, Jaime King, Christopher Meloni, and even Lady Gaga.

Liked the first movie? You should find enough to enjoy here. It's just a shame that it never hits the heights of its predecessor. 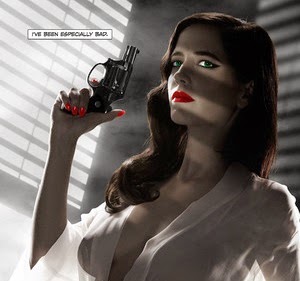