One of many classic movies that I start to review with both glee and immense trepidation, Chinatown is a film that you can't help thinking everyone already knows plenty about. Yet there's also the hope that some people either haven't heard of it or somehow haven't heard enough praise for it, and if any extra review added on to the mountain of glowing praise already out there can help then I'm all for that. Of course, it's unlikely, but I like to dream such little dreams.

On the surface, Chinatown is all about a detective named Jake Gittes (Jack Nicholson) hired to follow a man (Darrell Zwerling) and report on his actions. He believes that he was hired by the man's wife, but things start to twist and turn when he meets people who dispute his take on the situation. As Jake tries to figure out why he may have been set up, he gets deeper and deeper into a mystery that could end up getting him in some big trouble, at the very least. He could even lose his nose.

Dammit. Just looking at the vague paragraph above has made me sigh, realising that I'll never be able to summarise the sheer brilliance of this movie in standard review form. The beauty comes from the details, but those same details must be avoided here for the sake of people who have yet to discover the film. So ignore my attempt to sketch out the plot in the broadest strokes possible and let's just move on.

The direction from Roman Polanski is spot on, with every sequence playing out as a masterclass in how to make a gorgeous film about unpleasantness, but he's helped immensely by a perfect script from Robert Towne. Perhaps things weren't fully locked into place in earlier drafts, but Polanski himself crafted the final reel, which ended up being for the best. The two men are, as becomes clear throughout the movie, working at the top of their game, allowing them to craft what could be considered the best film either has been involved with (despite stiff competition from many other great movies).

Of course, it's a testament to the quality of the film, and the craft on display, that it could also be considered a career-best movie for many of the cast members. Nicholson is on his best form throughout, tempering that famous grin and demeanour with moments of clarity and incisiveness showing why Gittes is such a great detective. Faye Dunaway is a fragile delight, and John Huston is the overbearing polar opposite (playing Noah Cross, a man who can afford to have anyone in his pocket, if he so wishes it). Perry Lopez, John Hillerman, Diane Ladd, Burt Young, Bruce Glover and Joe Mantell also do great work. In fact, the standard of the acting across the board is so fantastic that I just want to reel off the entire cast list. But I won't.

Chinatown is one of those pure movie experiences that you can watch repeatedly and rarely grow tired of. It's one of those films that you will always want to watch to from start to finish, with no interruptions (or, at least, as few as possible). The cinematography, the Jerry Goldsmith score, the dialogue, the characters, THAT ending. Every single aspect of the movie is, for my money, perfect. Anyone wanting to disagree with me? Forget it . . . . . . it's Chinatown. 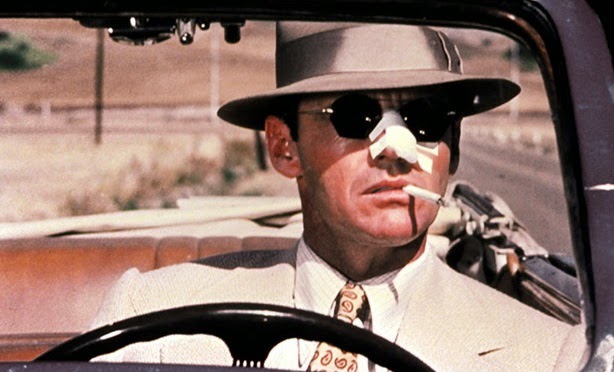