Director Renny Harlin had quite a run of movies in which he could do no wrong, as far as I'm concerned. I include Cutthroat Island in that selection (a decent action flick undeserving of its legacy as "the film that sank Carolco" - well, Showgirls also had a part to play there). Shane Black is a writer who has consistently entertained me over the years (from the greatness of Lethal Weapon up the not-as-great-but-still-good-ness of Iron Man 3). And Geena Davis? Well, I've been a big fan of her ever since I fell in love with her in Tootsie, small role though it was. I'm telling you all of this as a way to explain part of the reason why I love The Long Kiss Goodnight so much, which is directed by Harlin, written by Black, and stars Davis.

Davis is Samantha Caine, a housewife who only has memory of her last eight years on this planet. Anything before that is a blank. She has a private detective (Mitch, played by Samuel L. Jackson) on the case, but has resigned herself to the fact that she may never know about any of her old life. Unfortunately for her, it soon becomes clear that her old life is looking to majorly bite her on the ass. Events start to occur that jolt Samantha back to her old self, a woman who used to work as a skilled assassin for the government. As you might suspect, she made some enemies with her past career choice, and some of them are keen to get their revenge.

Davis is a convincing action heroine, and has a lot of fun transitioning from the sweet and innocent Samantha Caine to the foul-mouthed, deadly Charly Baltimore of her past. Jackson does great work as her co-star, with the two sparking off each other nicely in between, and even during, the action moments. The two might not quite make it to the level of previous action movie team-ups, but they're great nonetheless. Craig Bierko is an entertaining villain, irredeemably nasty and always slightly over the top, while Brian Cox and David Morse both play characters who could be good or bad, making Samantha's encounters with them all the more interesting. Yvonne Zima does fine as the young daughter, who may end up in a bit of trouble thanks to her mother, and Tom Amandes is the supportive partner.

There's a decent soundtrack, an unsurprising use of snow and Christmas decorations throughout (it's a Shane Black thing), enjoyable and ridiculous action moments, and plenty of great one-liners (also a Shane Black thing, of course). I can't say that Davis has had a bad film career, but her capability in this always makes me regret that she didn't ever get a chance to truly shine in many other female badass characters. Harlin directs with his usual competence, but the film turns to gold thanks to the great dialogue and the convincing turn from Davis. I love it. 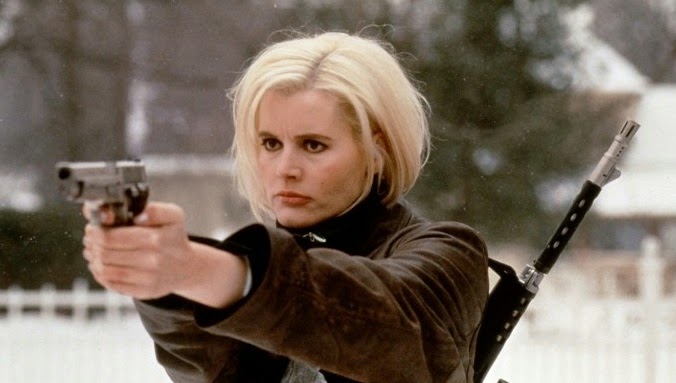