Mixing live action and animation to tell a tale featuring a detective, a femme fatale, a confused artist, and a whole heap of bad toons, Cool World is an interesting failure. But it will always be quickly forgotten in a cinematic landscape that also holds Who Framed Roger Rabbit, and rightly so.

The story focuses on a young man (Frank Harris, played by Brad Pitt) who ends up living in Cool World, despite the fact that he's a flesh and blood human now stuck in a world full of cartoons. Frank ends up taking on the role of guardian/protector. He becomes a detective, and his main concern is stopping other real people from coming over to Cool World, or vice versa. If a human and cartoon end up having sex, for example, then the results could be disastrous. But that doesn't stop Holli Would (Kim Basinger) from trying to make that happen, especially when she has the opportunity to bewitch the man who believes that Cool World is his creation (Gabriel Byrne).

Written by Michael Grais and Mark Victor, the script for Cool World is a hodge-podge of cliches, potentially intriguing ideas, and thin characters (aside from the three leads). Director Ralph Bakshi puts his fingerprints all over it, of course, with the style of animation, and the constant use of cartoon characters in very adult situations, and fans of his work will at least want to give this a viewing. It's just a shame that everything potentially good (even great) in the movie is often covered over by sub-par animation and a constant urge to make things silly. Not that ALL the animation is sub-par. There are some moments that are pretty good, really, but the quality just isn't consistent as it needs to be.

Pitt isn't exactly on top form, but he does okay. Likewise, Byrne. Both men perhaps spent most of their time making sure that they were looking at the right spot and interacting convincingly with characters that were to be drawn in later. Basinger, on the other hand, gives a great performance. In animated form, she's a real hottie, and in human form . . . . . . . she's Kim Basinger. It's a win win, and she effortlessly makes her character a memorable sexy seductress who convincingly winds men around her little finger.

Wild 'n' whacky in a way that will surely put off as many viewers as it pleases, Cool World feels very much like an experiment gone wrong. That may have something to do with the fact that it was seriously altered (read = watered down) once Basinger became attached and voiced concerns about the original tone. While not exactly kid-friendly, it would have been interesting to see this given a distinctly more adult feel. Whether that would have greatly improved it or not, we'll never know. 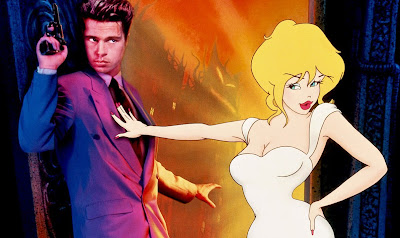 As much as I love the rest of the world, I can't keep up with all of the different links in different territories, but trust me when I say that it should be there on your local Amazon.
Posted by Tylerandjack at 12:00