A noir set in a world full of magic, this TV movie allows viewers to enjoy a memorable adventure in the life of detective H. Philip Lovecraft (see what they did there?), a man tasked with recovering a stolen book that just happens to be the Necronomicon.

Fred Ward plays Lovecraft, and does well in the role. He's always ready with a dry, witty comeback and he can take whatever's thrown at him. Which is sometimes magical, despite his own rule of never using any. He's hired by Amos Hackshaw (David Warner) to find that big book, which leads him to a run-in with his ex-partner (Clancy Brown) and the lovely Connie Stone (Julianne Moore). Before you can say "The Maltese Cthulhu" it all starts to get twisty and dangerous.

Joseph Dougherty's script may not constantly reference the author that lends his name to the main character, but there are plenty of little touches that certainly give the man a tip of the hat. There's also a big finale that could have been ripped from any number of Lovecraft tales, which allows for some great tension and fun for fans.

Director Martin Campbell treats the standard detective story seriously enough, yet manages to keep things light and enjoyable with the numerous details that come together to create the world that the main characters inhabit. This is a world of lively gargoyles, drinks being poured by servers who can levitate items, people being marked for death by dangerous runes, and much more. While not exactly action-packed from start to finish, the film is paced nicely and contains at least three of four decent set-pieces.

Ward seems comfortable in his role, as if it's the kind of part he always wanted but somehow missed out on. Warner does his usual kind of thing, and it's what he does well. He's been around a while, and knows a thing or two about . . . . . . a thing or two. And Brown is a bit gruff and intimidating, which is what HE does well. The one drawback among the main leads is Julianne Moore, who just doesn't fit her role as well as anyone else. She seems strangely out of time, a bit too contemporary. I can't explain it any better than that. Perhaps it's the forced attempt to make her extra sexy at all times, which doesn't pay off at all during scenes that force her to pretend to be singing, or maybe it's just my eyesight. Alexandra Powers is suitably lovely, playing the virginal daughter of Warner's character, Raymond O'Connor is suitably unlovely as a henchman named Tugwell, and Arnetia Walker is a fun addition, playing a witch trying to look after our hero (even if he doesn't always pay his rent on time). Lee Tergesen has a couple of decent scenes, but his character is used for a surprise/twist that doesn't have any impact, thereby rendering it unsurprising.

While it never quite does enough to break out of the confines of the small screen, Cast A Deadly Spell does enough to make it well worth tracking down. The details throughout make it a relatively unique experience, ripe for (re)discovery. I could even say, perhaps in a whisper, that this could also be ripe for a remake. 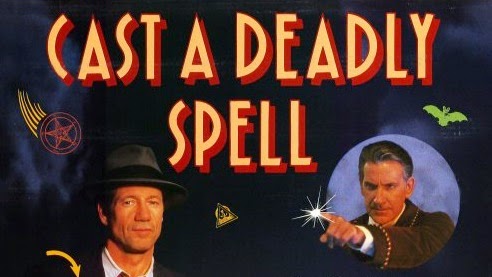