It may cause some heated debate among fans of the franchise, but people remember that David Fincher directed the much-maligned Alien³. They also tend to remember the enjoyable camerawork that was used to set up the layout of the main building in Panic Room. The rest all have their loyal fans and are unlikely to be forgotten any time soon. But The Game, this is the one that people always seem to forget about. Which is a great shame, because it's a damn fine thriller with a strong strand of pitch-black humour running through the whole thing.

Michael Douglas is Nicholas Van Orton, a wealthy businessman who doesn't seem to have any fun in life any more. It's his birthday, not that he's going to celebrate it in any big way, so he ends up at lunch with his brother (Conrad, played by Sean Penn). His brother has managed to get him a gift for the man who has everything. He has booked Nicholas a game with a company called CRS. What is the game? Well, it's different for each person. A live scenario is played out, and finding out the object of the game is often the object of the game. What starts out as fun and/or mildly irritating soon turns into something darker and much more dangerous, and Nicholas is soon convinced that he's caught up in the middle of something that's no longer just a game.

Put together with typical attention to detail by Fincher, The Game is based on a script by John D. Brancato and Michael Ferris. Although the tone of the whole thing is quite dark, the emphasis is very much on a sense of fun. The whole film is as much a game for viewers as the central premise is for the main character. Figuring out just who is in on the plot, and who isn't, is part of the fun. Another part of the fun is seeing such a composed, slightly arrogant, character being brought low by a series of unfortunate events. Okay, it's maybe not the nicest thing in the world to laugh at someone having such a bad time of things, but it's hard not to enjoy it ever so slightly. So enjoy it. Think of it as the darker, twisted sibling of After Hours (and THERE'S a great double-bill to line up some time).

Douglas is fantastic as Van Orton, a man who slowly starts to unravel as things around him move from the ridiculous to potentially lethal. He's done this kind of role before, of course, but this really plays to his strengths. Penn has a lot of fun with his small, supporting turn. The other main character who comes to the fore is a waitress played by Deborah Kara Unger. I became a big fan of Unger when she starred in both Crash and this movie in the space of a year or two, and she comes into this film at just the right time, lifting things up another notch as the second act starts to show how expansive the game is.

There ARE problems. Anyone looking for logic and believability should look elsewhere, and the long runtime starts to take a toll as the third act starts to outstay its welcome. For the most part, however, this is a great example of a director having a lot of fun with his audience. Nothing is done in a way that seems too cheeky or arrogant. It's just light fare covered in dark wrapping.

I doubt that this will be the number one choice when you ask people "what's your favourite Fincher movie?" and that's fair enough. But I'd love to think that it's not going to be consistently forgotten every time someone discusses highlights from his filmography. Because, as far as I'm concerned, this is definitely one of them. 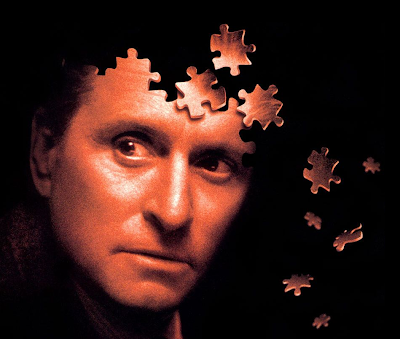