James Wright plays Rod Wilson, a radio show host who specialises in scary stories. That is the simple premise behind this horror anthology. And that premise could have been used well. Sadly, it's not, leaving you with a 100-minute movie that feels well over two hours.

Actually, to be fair, my reaction to this film is not entirely the fault of the film. This was shown in place of another film, due to a technical issue that could not be resolved until later on, and then there was a strange case of the audio becoming notably lower, and one Spanish tale being shown without subtitles. The film was paused, things were tweaked, and it started again from about a minute before the last thing we'd watched . . . still with no subtitles. None of these things, on their own, matter that much to film festival viewers who have seen technical hitches before, and will see them again. But pair it with the fact that this was the first film of the longest day of Glasgow Frightfest 2020, my bladder is notoriously small and seems to set itself according to scheduled end times, and the film went downhill fast after an okay start, and you have a recipe for a fairly hostile reaction.

What made things worse is that I recognised at least one of the short stories featured in this anthology. Much like the many films bolted together to be thrown up on Amazon, this was a film created by taking the works of others and using them in a feature without any real attempt to link them together thematically or stylistically. That's disappointing, but it's easier to forgive when each short film is given their own little credit section within the movie. Credited directors Luciano and Nicolás Onetti don't do that, and it feels quite sneaky.

All could have been forgiven if the wraparound was strong enough. It isn't. Poor Wright tries his best, and he seems a natural at the very beginning (which also includes a small figure of Bettlejuice for a bonus point), but as the film winds towards a horrible, and painfully obvious, conclusion, and as it stretches things out to squeeze in extra stories, things get worse and worse. It's laughably bad by the time you get to the last third.

Other problems come from the actual stories themselves. Too many of them have jittery, dark humanoid creatures ready to come around corners after doing that move where the place their fingers on the wall as they prepare to come into view. One has a character acting so stupidly that she would rather lie on the floor and blindly reach around a door to try and recover some keys than open the door normally, swipe the keys, and run. These things are not the fault of the Onettis, but those two are responsible for picking the content so, in a way, it also IS their fault.

Highlights include the opener, "In The Dark, Dark Woods", "Post Mortem Mary", and "The Disappearance Of Willie Bingham". I suggest you seek those out and enjoy them without having to put up with the rest of this film, most of which is horribly below-par. And I would have been saying that even without technical hitches affecting my mood. 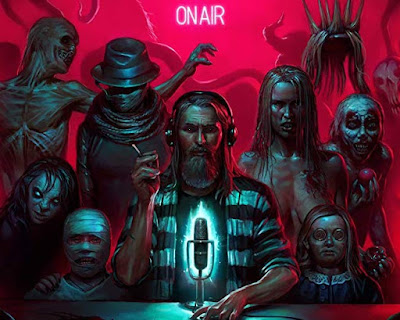