There's a part of me that realises I am being a tiny bit unfair to The Hustle by judging it so harshly against Dirty Rotten Scoundrels, one of my favourite comedies of all time. That film is itself based on an earlier film, Bedtime Story, which I have still not seen. And here we have something that works the premise for a third time, placing female stars in where there were previously men. Those women are played by Anne Hathaway and Rebel Wilson, which may be a mark against the film already for some.

Wilson plays Penny Rust, a small-time con artist who enjoys preying on men and getting them to hand money over to her. She never feels guilt, there's always a point that shows her that they deserved to be parted from their cash. Hathaway is Josephine Chesterfield, a con artist who plans more sophisticated schemes for much greater rewards. When these two cross paths, Josephine tries to send Penny away. Failing at that, she instead opts to train her, using her in some cons that make use of her talents. But there can only be one to really rule the roost, which is when the two bet on extracting a set sum of money from a young tech millionaire, Thomas Westerburg (Alex Sharp).

The feature directorial debut from Chris Addison, who has had a decent bit of practice with TV work over the years, The Hustle is a strange film to judge. Addison, who has been acting onscreen for just over a decade and has been part of some great comedy shows, seems to think that he's landed the perfect leads in Hathaway and Wilson. That's not the case, and it's this wrong decision that constantly threatens to sink the film.

Not that Hathaway is bad. She just doesn't feel right for the role. The same can be said for Wilson. Her con work never feels believable, because she has to spin things further and make them sillier and sillier. Even Sharp, not at all terrible, just doesn't feel right. That's the biggest problem the film has, the cast.

The script has lines to make you laugh, many of the best ones either unchanged, or only slightly changed, from the original script. It's also good when it allows Hathaway to roll her eyes and effortlessly one-up Wilson, but not so good when things feel most adjusted to either cater to a more modern sensibility, or manipulated to be in line with the style of Wilson. There's something about this premise, two con artists who decide to compete in a beautiful location to extract a set amount of money from one target, that lends itself to a timeless quality, something that then makes any talk of apps feel jarring. And the same goes for the many insults Wilson fires at Hathaway, as chucklesome as they sometimes are in their own right.

Perhaps I am being far too harsh, perhaps I am still being too kind to make up for my self-perceived harshness, but The Hustle doesn't ever work. Even the final scenes seem to get things wrong, in a small but very obvious way (to those familiar with the previous take on the material). 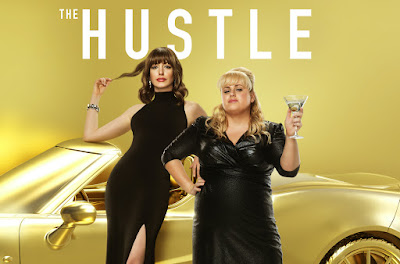