There seems to be something about ants in movies. Modern films just don't seem to be able to make good use of them. While we had the likes of Them!, It Happened At Lakewood Manor (AKA Ants!), The Naked Jungle, Phase IV, and (one I have a soft spot for) Empire Of The Ants many decades ago, nothing in the 21st century seems to have managed to use our hard-working insectoid friends.

You can always find a selection of films to scare arachnophobes. But for the ants? I can only think of It Came From The Desert, The Hive, and this one. And The Hive is one I have yet to see. Maybe it's the best of the three. It's certainly unlikely to be the worst.

Dead Ant is a film about a rock group travelling to a festival to play a set. The group has their best days behind them, but this performance may give them a boost. Their manager (Tom Arnold) is certainly hoping for that result. But all of that pales into insignificance when there is some cursed peyote smoked that then leads to an assortment of pesky ants, growing larger in size every time one is killed.

Although writer-director Ron Carlson doesn't do a terrible job here, he doesn't do anything particularly great either. The script isn't as funny as it could be, the ant attacks aren't all that exciting, and the only highlights are some amusing gore gags in the third act (especially moments that show a character losing their hands).

Thankfully, the cast are all game, almost all of them giving more to the material than it deserves. Arnold is fine, if you don't mind his schtick, in the role of the manager who has made it his life's work to look after one band, and both Sean Astin and Jake Busey are very entertaining as band members, given fine support from everyone else onscreen, whether they are portraying temperamental musicians, disruptive girlfriends, or festival attendees.

I REALLY wanted to like Dead Ant, mainly because the cast take on their roles with such gusto (and it has an amusingly cheeky opening that shows a young woman discarding her clothing while being chased down by a giant beastie). But it never does enough to make it a decent entry in this particular subgenre of the creature feature realm. I just couldn't stop thinking about better movies, even when the film was supposedly working through an action-packed final act (that also left me cold).

Not enough laughs, no tension, not enough bloodshed, Dead Ant is disappointingly lifeless. Maybe the NEXT killer ant movie will buck the trend. I won't hold my breath though. 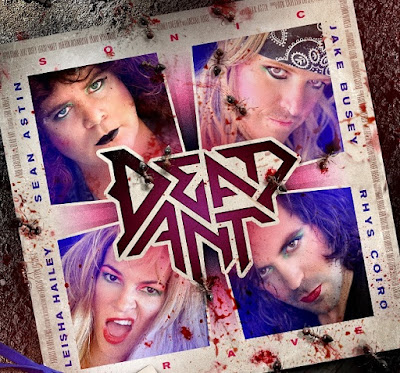