If you know your Creepshow from your Creepshow 3, your Amicus from your Hammer, and your Tales From The Hood from your Hood Of Horror then welcome aboard, you clearly enjoy a good horror anthology as much as I do. Which means seeing some of the bad ones too. I DID just mention Tales From The Hood. I go into every horror anthology with a sense of optimism. I want to enjoy the movie, and I know that if I dislike any one story then there's likely to be another one coming along that I could like a hell of a lot more.

The Mortuary Collection is a lovingly-crafted horror anthology tale from writer-director Ryan Spindell, built around two main points. First of all, there's a wonderful framing device. Second, he has managed to include The Babysitter Murders, a fantastic short that many horror fans would have seen when it did the festival circuit about five years ago.

It all starts, after a lovely intro of a kid travelling through a small town, in a mortuary. Not just any mortuary. This one is overseen by Montgomery Dark (Clancy Brown). His next main job is conducting the funeral of a child, and as the mourners leave he is then approached by Sam (Caitlin Custer), a young woman responding to the "Help Wanted" sign outside. To give Sam an idea of the role, Montgomery decides to tell her a few tales. Tales of death. One involves a woman finding something strange in a bathroom cabinet, one involves a lothario student who finds himself in a very unexpected predicament, and one concerns a man who has spent a long time looking after his sick wife. Sam also has a story to tell, and everything comes together nicely in time for the wraparound tale to be neatly resolved.

First of all, this looks gorgeous throughout. Absolutely gorgeous. It feels like some kind of more mature feature version of the Amazing Stories TV show, and the music from the Mondo Boys helps. A period piece without the period ever being truly defined, this is most certainly a film from someone who has grown up loving both anthology movies and also the standard selection of '80s hits from people such as Richard Donner, Steven Spielberg, Joe Dante, etc.

Second, the performances are generally very good. There's no such thing as a bad turn from Clancy Brown and this is another doozy. He's absolutely wonderful for every moment that he's onscreen. Custer does well opposite him, holding her own and reacting well to the various stories. The people involved in the different stories aren't on the same level as Brown and Custer, but everyone does a pretty good job, whether playing their role straight or working with a comedic twist (as is the case with Mike C. Nelson, a highlight as Dr. Harold Kubler, who actually appears in all of the tales).

There was, however, something stopping me from loving The Mortuary Collection. Thinking back on it now, it's a better film than I gave it credit for as soon as the end credits rolled. The lush visuals, decent special effects throughout, and inventiveness of some of the story beats certainly ass up to something worth checking out. It's just a shame that the first story was fairly weak, a fun punchline marred by the main actions of the character, and the second and third stories overstay their welcome slightly. The film runs to 108 minutes. Spindell should have somehow managed to hack 15 minutes out of the whole affair and this could have been a modern classic, especially with the strength of the framing device and the finale.

I'd still recommend it, and I know a number of people who came out of the screening I attended with nicer things to say about it than I did, but it would be nice if Spindell ever took the time to slice and dice some of the excess fat away. 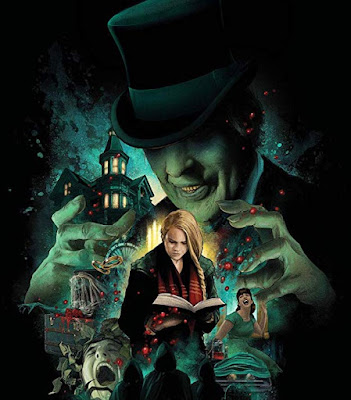