Made over a period of six months, and made with what is essentially no budget and a whole lot of imagination, blood, sweat, and tears, Death Of A Vlogger is undoubtedly a fun film for horror fans who give it their time. It has problems though, many of them stemming from decisions made by director-writer-star Graham Hughes.

Hughes stars as . . . Graham, a young man who keeps trying to entertain the internet masses with little uploaded videos. Things take a turn one day when he films himself recovering from laser eye surgery, looking blindly at his webcam while things around him start to move in a way that would suggest paranormal activity. He ropes in his friend, Erin (Annabel Logan), and eventually requests the assistance of a paranormal investigator named Steve (Paddy Kondracki). But how much of what we're seeing is real, and how much faked for the sake of internet fame? Most people seem to take it at face value, but there's at least one person (Alice, played by Joma West) who believes that there is something else going on.

Creatively put together by Hughes, Death Of A Vlogger is displayed in the style of a fake documentary. You get interviews with most of the main participants, a lot of footage shown as it was filmed/streamed, and captions or comments explaining some differences between the perceived focus of the footage and the actual focus of the footage.

Unfortunately, being in the style of a fake documentary is one of the decisions that works against Death Of A Vlogger. It feels like the easiest way, a lazy way to assemble everything without the need for a strong enough through line, especially when you get to the end and realise just how restrained the interview subjects have been throughout. It's the film equivalent of the epistolary style of writing, and you need to REALLY nail every aspect of the formula to get it right. This doesn't do that.

The fact that it's also a fake documentary with some elements of exposed fakery in there is both a plus and a minus. It's ingenious, in a way, as Hughes has people discuss the very tricks that he used to create his scares, but it also removes any tension, for the most part, as you know just what's being done to manipulate the image, and manipulate your own reaction to the onscreen events.

There are some great moments here and there, one involving an intense and creepy "bedsheet" ghost and the other involving some brilliantly executed mind-bending manipulation of the flat which is the main location for most of the film, but it's undone by moments like a horribly clumsy seance scene, easy jump scares, and moments that have characters keeping a camera up at their eyeline while they keep refusing to SWITCH ON A BLOODY LIGHT!

Everyone does well enough in the acting stakes, including Hughes. Kondracki provides a number of solid laughs with his comedic turn, his vanity and self-promotion being the source of a lot of humour, West is good at being completely cynical about the whole thing, and Logan is a believable good friend.

It's hard to be critical of this film without feeling as if you're denying a treat to a small puppy. The film, and Hughes himself, sets out to entertain you, and make you think (it actually has a smart way of intertwining the paranormal activity with the standard pitfalls of the internet age, including the mix of feedback you can receive and the phenomenon of being shamed on the internet). It achieves both of its aims, and a lot of people had more fun with it than I did. I just think that this could have benefited from a consistency in the character reactions, a better format for editing the clips together, and a step away from the horror movie clichés. 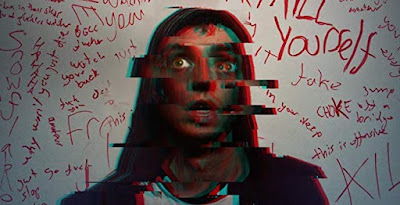