I wasn't sure what to expect from The Hunt, but I can tell you that my expectations were low. It seemed to be a standard riff on The Most Dangerous Game that managed to gain some notoriety by using the modern day polarising of political opinions as the basis for a lot of the main thrust of the plot. Well, that in itself didn't gain it the notoriety. The fact that it had the release date pushed back, and it could tag itself as "the film they didn't want you to see", helped to give it some notoriety. But is that all it has to offer?

Things start off with a number of great moments, a number of short, sharp shocks that deliver bloody entertainment while also making the most of some amusing cameos. It lets viewers know that they're going to see some extreme violence, if sometimes in an almost cartoonish way, and that nobody will be safe. And then we meet the one person we think may be safe for most of the movie. Crystal (Betty Gilpin) is onscreen for a minute or so before showing how much sharper she is than the rest of the people who have been scattered around as prey for some privileged folk who want to bag the ultimate kill. And that's all you need to know. The bodycount is impressive, Crystal has to constantly outwit opponents with more resources and intel than she has, and viewers are carried along to a third act that should provide some answers about how the hunt began, as well as some predictable satisfaction. Hopefully.

Although directed, and directed well, by Craig Zobel, this is a film that is very much covered in the fingerprints of the writers, Nick Cuse and Damon Lindelof (who both also worked together on the excellent Watchmen TV series). It seems pretty clear where they like to align themselves, politically, but they do at least take some time to show how the current lack of tolerance from those who find themselves offended can become a bit of a chicken and egg scenario with opinions being doubled down on and jokes being turned into a reality.

Gilpin is great in the lead, and it's her best movie role yet. She's believably tough and smart, and quickly sets her mentality to a focused survival mode. There are a few hunters given screentime, all of them fun in the way they can't comprehend ever being one-upped by someone they picked to be killed off, but the most recognisable is played by Glenn Howerton, who has fun with a role that taps into the sociopathy/psychopathy of his most famous comedic persona. Macon Blair is good in a very small role, and I'll mention Wayne Duvall, Ike Barinholtz, Emma Roberts, Amy Madigan, Reed Birnet, and Ethan Suplee, all of them doing their bit to add to the thrill of the hunt. Hilary Swank is also in the mix. She may not be onscreen for that long, but she makes a great impression (and it made me realise that I hadn't seen her in a major release for some time, certainly not having as much fun as she has here).

I'm sure that some people will watch this and be annoyed by the script, for one reason or another. It's a no-win situation for anyone writing something that weaves the current trend of making everything an ideological war with standard exploitation thrills. But everyone involved knows that. That feels like it's part of the point. 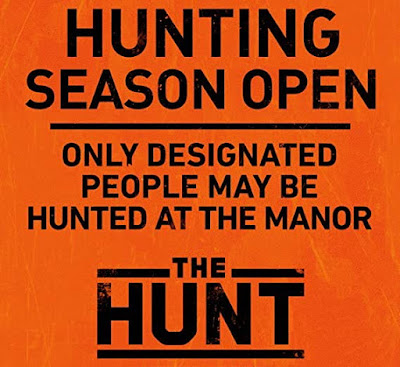