There's nothing inherently wrong with Paint It Black. Nothing that makes it stand out as a terrible film. In fact, I'd say quite the opposite. The cast, the performances, the script, it's all good stuff. Which makes it a shame that I, and many others, end up discovering it on Shudder. Although I am always happy for Shudder to show work that pushes at the boundaries of horror (and they've included a number of Japanese crime movies that aren't really horror at all, but either have moments of horrific violence or simply have that crossover appeal), Paint It Black isn't a film that horror genre fans will enjoy, if they're expecting a horror film. Or even a film with some elements of horror. This is not one of those films.

Alia Shawkat plays Josie, a young woman who ends up rocked by the sudden death of her boyfriend, Michael (Rhys Wakefield). While trying to process her feelings, she ends up at loggerheads with Michael's mother, Meredith (Janet McTeer). Meredith wants to find someone to blame for the death of her son, wants to share memories of him, and wants to prove that she retained a strong bond with him, despite mounting evidence to the contrary.

I'll admit that it took me a bit longer than it could have to warm up to Paint It Black. I initially wondered where the horror elements were going to come into play. When I realised that this wasn't a horror movie, not by any stretch of the imagination, I settled into it more easily, enjoying it more for what it was than what I expected it to be.

The first feature directed by Amber Tamblyn (who has been acting onscreen for over two decades now), Paint It Black is an impressively interesting and unique work. Tamblyn also helped to shape the script with Ed Dougherty, adapting the book by Janet Fitch, and she shows a real knack for treating dark drama in a way that is thoughtful, stylish, and a step removed from the norm.

It helps that the cast is so good. Shawkat puts in yet another great performance (when has she ever been bad?) and McTeer attacks her role with gusto, giving and taking the hits in her battle of wills with Shawkat. Wakefield does well enough to make his presence more impactful than it otherwise could have been, Alfred Molina pops up to steal a couple of scenes in a supporting role, and Simon Helberg does exactly the opposite.

Grief is processed by people in many different ways, and that can depend on many different factors. This is what Paint It Black scrutinises, and it's not necessarily saying one person has more right to grieve in their way than any other. Yes, there is one character here who is certainly a villain of the piece (almost a pantomime villain, at points), but things go on longer than they would because of others trying to offer them room to battle through the grieving process in their own way.

This is definitely worth your time, and I'll look forward to whatever Tamblyn does next when she's behind the camera, but you can't go into it expecting a horror movie, or something even containing a hint of the supernatural. That will only lead to disappointment, does a disservice to both the film and the viewer, and may stop you seeing a great little drama for what it is. 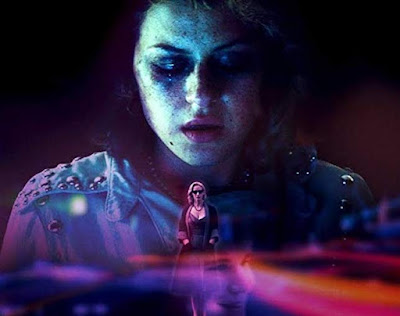