Expanding upon a short film from a few years ago, with different cast members taking on the main roles, The Cleansing Hour is a pleasing mix of good comedy and good horror in a fun central premise that feels very much like something we would have enjoyed in the mid to late 1980s (that was my feeling anyway).

Ryan Guzman is Father Max, the host of a popular web series that sees him vanquishing various demons in spectacular exorcism displays. Boosted by his main friend, and tech guy, Drew (Kyle Gallner), Max continues to try and increase his audience. His biggest chance to do that comes about when their latest guest doesn't show up, leaving a space that is filled by Drew's girlfriend, Lane (Alix Angelis). Lane ends up being possessed for real, quickly taking Max well out of his depth, and forcing him to admit how much of his work isn't actually real.

Directed by Damien LeVeck, who also co-wrote the screenplay with Aaron Horwitz, The Cleansing Hour is full of energy and, yes, spirit throughout, setting everything up in the opening act with quick and easy moments of characterisation and a number of obvious, but no less enjoyable, gags. It's always fun to watch someone engaging in fakery be forced into doing something for real, and that goes double for someone as vain and self-denying as the character of Max.

The special effects throughout are generally very well done, especially considering the fact that this is a film that seems to look great throughout (some lovely cinematography from Jean-Philippe Bernier) without having a huge budget to ensure everything is perfect. Demonic make-up is fantastic, as are some CGI creations, including a final reveal that few will enjoy as much as I did, but I loved it and that is what counts.

Guzman is very good in his role, all ripped handsomeness and smouldering looks to the camera before he starts being unsettled and manipulated by a surprisingly real demon. Gallner is equally good, starting off seeming like a strong supporting character before soon becoming one of the leads. And the same can be said for Angelis, who ends up overshadowing all with an absolutely brilliant performance making use of all of the standard possessed victim tropes. There are also decent performances from Emma Holzer, Chris Lew Kum Hoi, Daniel Hoffmann-Gill, and Joanna David, among others, although the focus of the film usually remains focused on Max, Drew, and the possessed Lane.

Although never quite as funny or scary as it could be, The Cleansing Hour is a horror comedy that generally achieves what it sets out to do. You will be entertained from start to finish. There's the main battle against a powerful demon, a number of set-pieces involving the death of those just to the side of the main characters, and some amusing cutaways to various viewers watching around the world (leading to a great payoff at the very end of the film). I'm going to default my opinion down ever so slightly to compensate for that added festival factor, but this is still highly recommended to genre fans who like some fun in their demonic fundamentals. 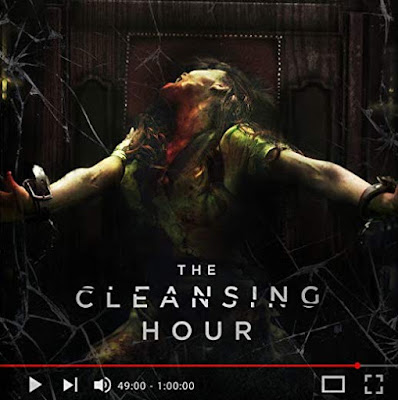