Extra Ordinary is a supernatural comedy that benefits from that very lovely and low-key type of Irish humour that has worked so well in a variety of past gems. It's all about the characters and their fairly nonchalant way of dealing with a situation that keeps getting a bit crazier with every passing minute. A hit at many festivals, and I can see it playing well with a big audience, it sadly didn't quite work for me as well as it did for many others.

Maeve Higgins plays Rose Dooley, a driving instructor who also has a talent for communicating with the dead. This is why she ends up being contacted by Martin Martin (Barry Ward), a man who is being haunted by the spirit of his dead wife. Unbeknownst to Martin, his daughter (Sarah, played by Emma Coleman) may also need help, having been targeted by Christian Winter (Will Forte), a one-hit-wonder pop star who wants to make a deal with the devil to give his career a new lease of life.

Higgins is quite the star here, giving the kind of perfect comedic performance that will surely see her gaining some more roles in the near future (although some have been recognising her talent over the past few years already). She's the reason that this works as well as it does, and her scenes with Ward are all very good. But that makes it harder to understand how Forte doesn't quite work in his role. I've been a big fan of him for many years, the guy has great natural talent, but his turn here just doesn't work. It's somehow either too low-key or too weighed down by the expectations of the stereotype (the faded pop star longing for the return of his golden years). I'd go so far as saying that a number of his scenes see him outshone by his onscreen wife (played by Claudia O'Doherty).

Perhaps Higgins shines as the star because a) well . . . she's the star, and b) she was able to work more into the script, alongside Demian Fox. The main body of the script was co-written by the directors, Mike Ahern and Enda Loughman, so it's hard to consider who should get credit for the better moments, but Higgins has so many great little moments that it would seem obvious that she knows how to shape things slightly to play to her strengths.

As for the rest, it's all competently done. Ahern and Loughman show what needs to be shown, and make great use of their relatively small budget, whether they're showing ghosts onscreen, demons, or just another personality coming through a host body, complete with materialised cigarette. It's just that everything seems to sit in a strange middle area, being quite simple and yet having too many elements in the mix that get in the way of the comedy. You have a main character with a strange talent, and then she meets someone else with a different strange talent. You have a villain who could be an amusing and over the top character, but he ends up being quite banal and mediocre most of the time (which I know is done for comedic effect, it just doesn't feel as fun as it could be). And there's a backstory that plays into things, despite not needing as much time devoted to it as it gets.

I liked Extra Ordinary. I just didn't love it. It made me chuckle occasionally. It tried to be a bit different from many other comedies that have used the horror genre trappings over the past decade or so. And it's worth your time. I just think it may be one you enjoy more in the right company. 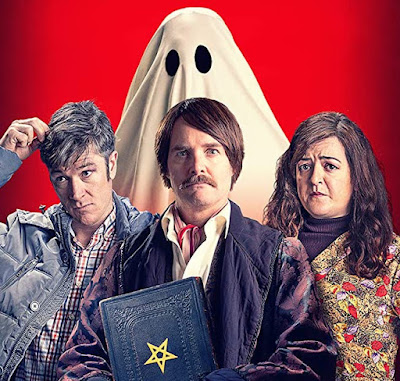