The only film, to date, directed by Alex Craig Mann (who also helped to get it into screenplay form, from the play by Rob Rinow, and it seems like odd material to present on stage), Detention Of The Dead is exactly what you expect it to be. It's The Breakfast Club with a load of zombies thrown in to the mix.

You have the nerd (Eddie, Jacob Zachar), the jock (Brad, Jayson Blair). the jock friend of the alpha jock (Jimmy, Max Adler), the stoner (Ash, Justin Chon), the cheerleader (Janet, Christa B. Allen), and a goth (Willow, Alexa Nikolas). There's one other pupil in detention, Mark (Joseph Porter), but he's only there to suffer from a bite wound and then attack the teacher (Mrs. Rumblethorp, Michele Messmer). That's it. The zombie problem becomes apparent very early on, the teens all figure it out and start to make a plan that they hope will help them avoid being eaten, and everyone takes turns at getting along with one another and letting long-held feelings of anger rise to the surface.

Detention Of The Dead, despite how much fun you think it could be, is disappointingly average throughout. Utilising a group of characters who are nothing more than complete cinematic stereotypes can work, usually by underlining every aspect of them conforming to the stereotype or by subverting expectations, but nothing is done here to make them of any more interest. At all. I wish I was exaggerating, but this could have easily been written by teenaged me, overflowing with my wealth of John Hughes movie references and deciding they could be mashed up with some zombie carnage. If you want that kind of thing done well then I encourage you to seek out the far superior Dance Of The Dead (the fantastic second feature from talented director Gregg Bishop).

The cast don't do a terrible job, considering how little they are given to really work with. The leads are likeable enough, but that stems from how easy it is to dislike some of the other characters for various reasons. I also usually like goth gals in movies, so that helps, even if Nikolas is playing someone who seems fairly uncommitted to the full goth aesthetic.

Mann directs competently enough, punctuating the runtime with occasionally excellent gore gags and balancing things nicely between the fight for survival and the standard teen conversations we've heard many times before. The script has enough dialogue to clarify that at least one of the characters knows enough about zombies to be more useful in this situation than the others, and it moves on quickly enough after namechecking Romero, but it's clear that this is a film to be accessible to those after a light horror comedy, as opposed to zombie movie fans who would appreciate a lot more nods to the big names in the subgenre.

The biggest problem, and it can often be a problem for films that use zombies in a way that tries to mix genres, is that the zombies never feel like a major threat. They ARE, and we see them munching on bodies and obviously trying to get at our heroes, but there are too many moments that have the main characters either still having fun in the middle of the flesh-eating or making progress just that bit too easily.

Not a bad film, it's just a shame that Detention Of The Dead doesn't do enough to be a good one. It's passable entertainment, but it could have been much better. 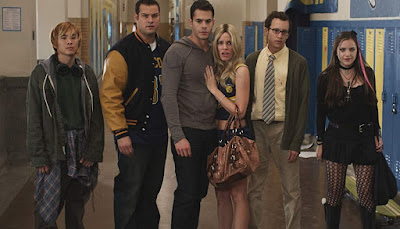