Joe Begos has, whether you like them or not, built up an interesting body of work, working within genre boundaries to create specific examples of movies that clearly influenced him. Almost Human got him a good amount of love from the start, The Mind's Eye is referred to by many people as a Scanners sequel that you never knew you wanted, but definitely deserved, and Bliss was a wild ride into the realm of vampirism. Now we have VFW, a siege movie that uses some great genre names in a scenario that is pure exploitation gold.

Society seems quite crumbly, to say the least. Lawlessness abounds, and the streets seem more perilous than ever, thanks to the overwhelming number of criminals and addicts taking over certain areas. The latest drug that the addicts want to get their hands on is known as Hype. None of this ever really affects the veterans who run and populate a small bar in the middle of a potentially dangerous area. Stephen Lang is the bar owner, and it is his birthday, and his main friends and patrons are played by George Wendt, David Patrick Kelly, William Sadler, Martin Kove, and Fred Williamson. They're about to be affected by the situation though, caught up in the middle of things when a young woman runs into the bar with a bag full of stolen hype and some violent baddies right at her back. A merciless dealer will do whatever it takes to get his product back, and he has a multitude of addicts ready to do his bidding in exchange for some free samples.

VFW is what I would best describe as a bruising beast of a film. Begos, working from a script by Max Brallier and Matthew McArdle (their first feature), is clearly in his element, the simple premise allowing him to showcase the cast and move things along at a cracking clip to throw viewers into some scenes of gleefully-depicted violence and bloody carnage. The first act sets everything up with wit and brevity: the camaraderie between the veteran soldiers (VFW stands for Veterans of Foreign Wars, in case you didn't know . . . I didn't), their welcoming of a young returning soldier (Sean, played by Tom Williamson), and the ruthlessness of the big baddie (Boz, played by Travis Hammer). And then comes the fighting. And the death. And the many pointy and heavy things being used to squish body parts. And that just keeps on going all the way up to the last scenes.

There are some times when the low lighting and quick editing of the violence makes this a bit harder to keep track of than I would have liked, but it also helps to keep everything feeling pleasingly down 'n' dirty. I really liked Bliss, but it's hard to see beyond the sheer visceral thrills and fun of this to rank it as anything other than the best thing that Begos has done to date.

A lot of that comes from the cast, no doubt. Every single one of the older tough guys gives the kind of performance that has you immediately wanting to revisit many past gems in their filmographies. Lang seems to have cornered the market over the past decade or so on elderly badasses (despite certain '80s action stars trying to show they can still deliver the kind of thrills they gave us decades ago), Williamson has never lost his cool, Sadler gets most of the best lines, and Kove, Wendt, and Kelly are great fun. Thankfully, the younger cast members aren't left hanging. Sierra McCormick is likably plucky as "Lizard", the woman who starts the ball rolling on the small war, and Williamson earns respect from his elders as he holds his own in the heat of the battle. On the other side, Hammer is a very entertaining villain, someone who won't be negotiated with and has complete confidence in the odds of his victory, and Dora Madison (who featured in Bliss, which also had Wendt in there, as well as Graham Skipper and Josh Ethier, who both have roles in this) is enjoyably badass in the role of Gutter, a character who could have easily crossed over into this movie world from the cinematic madness of Neil Marshall's Doomsday.

If you're a genre fan who also loves a good siege movie (and we can all name many classics off the top of our heads) then I really can't imagine you disliking VFW. The premise, the pacing, the cast, the improvised weaponry, the sheer level of badassery barely contained in each scene. (Rio) Bravo to Begos, and I look forward to whatever he gives us next. 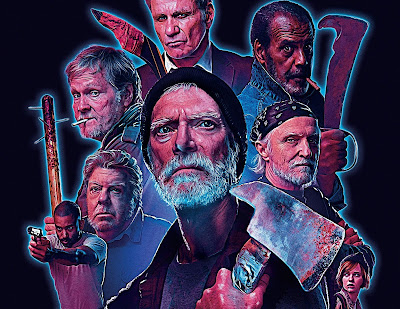