I think it's safe to say that when most people heard about an animated movie version of The Addams Family, it didn't seem to be the best idea. Having now seen the film, it was actually a smart way to refresh the property and present it to a new audience. Can you imagine a new live-action version? Who would try to replace the incomparable Raul Julia and Anjelica Huston? This side-steps that problem, but also assembles a bloody great voice cast to take on the iconic roles.

The plot is nice and simple. We start with Morticia (Charlize Theron) and Gomez (Oscar Isaac) about to get married. Angry locals barge into the ceremony, and the Addams family end up in the old gothic home that we know. Life seems good, even as Wednesday (Chloë Grace Moretz) and Pugsley (Finn Wolfhard) spend most of their time trying to harm one another. But things are happening downhill from their home, where Margaux Needler (Allison Janney), a famous TV home makeover personality is creating a whole idyllic little suburb. She wants it to be perfect, and wants to make a profit from selling all of the homes, so when the Addams home comes into view . . . something has to be done about it.

This is a very pleasant surprise from start to finish. The screenplay, by Matt Lieberman (with a number of people involved in shaping the story), is full of fun little gags most people would expect from any Addams Family tale. There are the usual macabre details, the sibling rivalry, a big family event coming up, and even a fun story strand that sees Wednesday becoming slightly corrupted by the influence of a young girl she befriends (when I say corrupted I mean there's at least one worrying moment when Wednesday looks to add a bit of colour to her usual look).

The direction from Greg Tiernan and Conrad Vernon all seems fine (even if it is a mile away from their last feature, Sausage Party, although both men have a good selection of child-friendly work in their filmography) as they take simple plot beats and allow the characters to lift the material. You also get a couple of musical moments, including the familiar theme near the start of the movie, and some enjoyably over the top fight choreography (mainly between Gomez and Pudsley, as the former prepares the latter for a rite of passage ceremony that will take place in front of the whole family.

Theron and Isaac are great in the lead roles, and I think both COULD possibly work as live-action versions of these characters, and Moretz, Wolfhard, and Kroll are very enjoyable as the two kids and Uncle Fester, respectively. Janney is as fun as she usually is, and her voice also perfectly suits her character, while everyone else does decent work. It's also worth noting that, despite not really being as recognisable as usual, it's fun to have Snoop Dogg voicing Cousin It.

I hoped that this wouldn't prove to be too painful. Instead, I ended up quite enjoying it. It still sits behind the Sonnenfeld movies and the TV show, but it's a nicely detailed bit of fun that balances everything between the fun for kids and the recognisable elements that fans of the characters will appreciate. 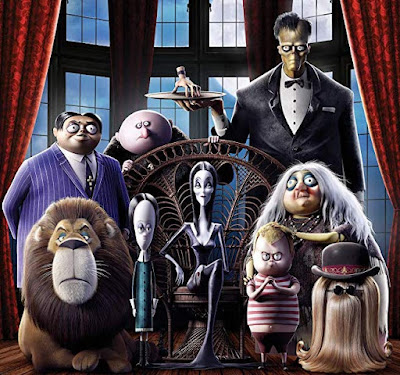