Oh wow, just . . . wow. Luciferina is a bad film, and it just gets worse as it travels to an ending that viewers won't care for, and certainly won't find tense. At all. The fact that writer-director Gonzalo Calzada intends it to be the start of a trilogy is depressing enough to make this review even harder to write.

Sofia Del Tuffo plays Natalia, a young woman who returns home from her time in a convent to check on her comatose father after the recent death of her mother. This puts her in the line of fire as her sister, Angela (Malena Sánchez), wants to target someone with her anger and frustration. Angela feels that something has been wrong in their home for some time, so she obviously invites Natalia and a bunch of friends to a jungle excursion that will lead to some kind of cleansing spiritual rite.

There's a lot going on in Luciferina, a number of interesting, if mishandled, ideas that help to justify the 111-minute runtime, but Calzada doesn't seem to be able to step back and remember what he's aiming for, in terms of both the tone and the main comments he makes. You can pick and choose certain individual elements, but it's a case of sifting through for the nuggets of gold, all while being soaked and chilled by muddy water that just keeps rising up while .you do your panning.

Del Tuffo is good, as is Sánchez, but there's nobody else here that I can recommend. Not all their fault, the  script makes almost every other character either a pain in the backside or just a bit of a cretin, to say the least. I get it, to a degree. A film like this requires people around the main character to be disposable, to be available as potential victims to any evil forces that may manifest themselves and grow stronger on the way to the finale. That still doesn't excuse how poor they are though, and Calzada really needs to work on this side of his craft, because it unbalances everything.

The other thing unbalancing the movie is the rather novel way of meeting evil head on and dealing with it. There's something very intriguing at the heart of this, something that takes the common sub-genre tropes (this is essentially a possession/exorcism movie) and gleefully turns them upside down. But it ends up all being silly, and a case of too little too late after a middle section that constantly wears you down with so much dull nonsense that you don't care about anything by the time things potentially perk up again.

This could have been a unique and thought-provoking take on familiar material. Sadly, Calzada undoes it all with his poor writing, his inability to connect one moment of eerie imagery to the next, and an overall clumsiness that undermines everything he tries to do. I am sure there are some people who will enjoy this more than I did, but I'd be very interested to find out how they could overlook all of the noisy and distracting mis-steps made throughout 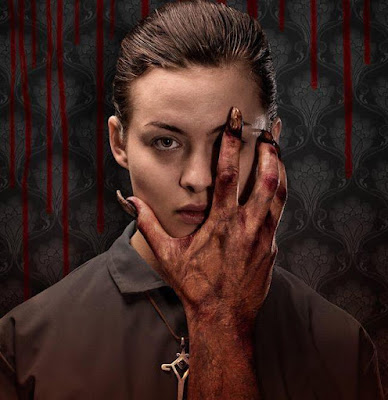