The feature directorial debut of Glenn Danzig, this horror anthology will ensure his name is remembered by film fans for many years to come. Not necessarily for the right reasons though. There's no easy way to say this. Verotika is laughably bad, and I mean that for almost every single minute of the runtime.

The least painful aspect of the whole film is the wraparound section, "Morella", which has Kayden Kross onscreen playing a horror hostess. Even these moments are undone by the fact that different cameras are pointed in her direction while she has obviously been directed to focus on a different point while speaking about the segments. Buckle up though, that is just the start. "The Albino Spider Of Dajette" is all about a beautiful woman (Dajette, played by Asgley Wisdom) who has eyes where her nipples should be, and also has a weird psychic link to some guy in what can only be described as a cast-off, bleached suit from any episode of "The Tick" (Scotch Hopkins is the man having to suffer this embarrassment). Next is "Change Of Face", a tale all about a Mystery Girl (Rachel Alig) who often likes to . . . change her face. And finally you get "Drukija Contessa Of Blood", which is exactly what it says it is, with Alice Tate in the role of Drukija.

It would be easy to make this review nothing more than a list of criticisms, a way to let off steam about all of the things that Danzig somehow thought would cut it with adult horror fans. The dodgy French accents, the fact that the nudity is both fairly constant and yet also completely unarousing, the moment in which you see that albino spider man standing upright with the ragged hole in the crotch area of his suit clearly visible, all of these things are worth mentioning, but it feels like singling them out for comment somehow detracts from everything else that needs to be mentioned.

I am also not going to slate all of the stars. They all do bad work, some even worse than others, but they're also handicapped by bizarre creative decisions made by the writer-director. I am not sure that many of these actors would fare any better in other movies, but I know that nobody on the planet would want to be judged by their performance in this alone.

Adapting these stories from his own comic books, Danzig shows a stunning lack of good decision-making capability in almost every major facet of his film (and we are definitely placing all of the blame on his shoulders, as director-writer-executive producer-musician). I am unfamiliar with Danzig's music career, although I know he has his fans, but even the music throughout Verotika is painfully bad, often a disjointed piece with a bad audio mix that wouldn't seem out of place in the worst SyFy Channel original. The script has some of the worst dialogue I have heard onscreen since The Room, easily, and part of me was wondering if Danzig was aiming to get himself the same kind of infamy as Tommy Wiseau, but I decided against it. This is either well-intended, incompetent nonsense or it a lot worse, a lazy and cynical attempt to milk some money from fans who will accept everything he puts out in good faith.

Many may claim this as the worst film they've ever seen, certainly the worst with an alleged $1M budget, and I wouldn't argue too strenuously with them. It only avoids being rated amongst the lowest of the low by me because I gave it one point for some of the decent sets used and then one extra point for Kayden Kross. 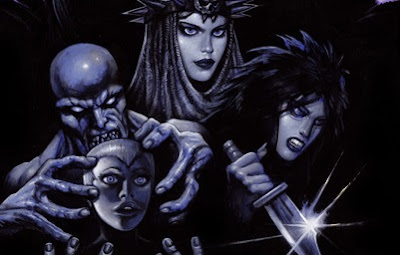