The second (and many would rate it as the best) instalment of  Park Chan-wook's Vengeance Trilogy, Oldboy is a film I deliberately haven't revisited in many years. I was always waiting for the right time, and I always wanted to watch it as part of the trilogy, compared to my first viewing, when I was blown away by the film, then saw Sympathy For Mr. Vengeance some time later, and eventually saw Lady Vengeance when that was released later.

Choi Min-sik plays Oh Dae-su, a man who is snatched off the street and imprisoned in a room for fifteen years. He doesn't know who his captor is, nor does he know why he was chosen for the punishment. When he is released, again without any explanation, he sets out to find out who was responsible for taking such a large chunk of his life from him. On the plus side, he meets and falls in love with a young woman named Mi-do (Kang Hye-jung). On the downside, he sets off on a path of revenge that may not lead to the resolution he wants. It may, in fact, lead to a realisation that his time alone in that room was only part of his punishment.

Oldboy is a film with a few amazing set-pieces helping to make it unforgettable. If you've not seen the film already then you've still probably heard about moments from it, be it the eating of a live octopus, the dental trauma, the astonishing corridor fight between a number of men and a hammer-wielding Min-sik, or even the details of the ending (I would never discuss such things, but you may have read or heard something spoilerific by now, especially if you're a fan of Asian cinema). Thankfully, the film doesn't JUST rely on those moments. Based on a manga of the same name, and adapted into film form by Chan-wook, Hwang Jo-yun, and Lim Jun-hyung, the entire movie is a carefully constructed puzzle, full of tense moments as you become more and more invested in the central characters and hope to see no further harm befalling them.

Min-sik is an absolute tour-de-force in the lead role, starting as a useless drunkard detained by police, becoming the traumatised prisoner, and then turning into the survivor consumed by a need for explanation and revenge. Hye-jung is very good in a role that could have easily felt too fake and contrived, and the goodness she emanates is something that reverberates through the finale, lending more impact to every plot development that feels like a very hard slap in the face. Yoo Ji-tae is suitably conniving and confident as the main figure taking his amusement in working the main character like a puppet. That's not a spoiler. The reveal of who is ultimately responsible for such prolonged imprisonment and torture is not really a big deal once it becomes clear that the main question to ask is why? The other main actors worth mentioning are Kim Byeong-ok, playing a bodyguard to Ji-tae's character, and Oh Dal-su as an employee who oversaw the day to day running of the prison.

But it's hard to deny that this is Chan-wook's film all the way. He may have gathered up some great players, drawing what may well remain a career-best turn from Min-sik, but his attention to detail, his audacity in the execution of the material, and the choices made while leading viewers to what I consider to be one of the best third act reveals of all time, while also leaving enough ambiguity for everyone to provide their own interpretations, all come together to make this his masterpiece (and that is despite stiff competition from the likes of Thirst and The Handmaiden).

This is a set you may want to pick up. 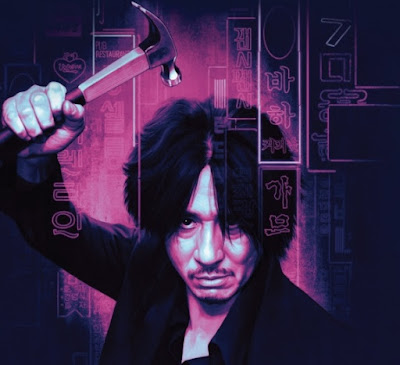