An impressive slasher film from writer-director Tony D'Aquino, The Furies has some interesting ideas in the mix, even if they're not all executed perfectly (no pun intended).

Airlie Dodds is Kayla, a young woman we first see arguing with a good friend, Maddie (Ebony Vagulans). And then it's not long until we see Kayla rousing from unconsciousness in the middle of some woods. She, and some other young women who have also recently woken up, are being hunted by large masked men with large tools that can be used to mutilate and kill people. Kayla starts off feeling understandably terrified and frantic, but things start to look different when she figures out how she and the others can work together to possibly improve their odds.

On the one hand, I was interested by the extra ideas mixed in here. On the other hand, I couldn't help wishing that this was more of a pure slasher film, without the need for any framing device that added some tech quirks to the format and made you think of the reason for the hunt/game. There's also a particular plot device that, while not dissimilar to something we have seen done before, feels a bit sillier this time around, ironically because you get an attempt at an explanation for it. Sometimes the known can be known and the supernatural can stay unexplained.

It doesn't help that the main characters are hard to really identify with. That's not to dismiss the good work from Dodds in the lead role, but D'Aquino forgets to give anyone any personality beyond one main trait (and our lead has epileptic fits, that's really the one thing that defines her). Having watched the film very recently, I can already impress you with my lack of being able to recall the few main supporting characters, with the exception of Rose (played by Linda Ngo). I know that slasher films aren't renowned for the character development and depth, but there are still ways to present things in a way that at least tricks you into thinking you learn more about the victims before they are despatched in various ways.

Having made that particular complaint, however, there's no denying that this is a real treat for horror fans who want to enjoy some gory FX work (which seems to be mostly practical). The first big kill is a particularly jaw-dropping moment. I won't describe it, suffice to say that I cannot recall seeing anything like it onscreen before. You get limbs ripped off, eye trauma, heads exploding, all delivered with aplomb and loads of the red stuff thrown around. Well done to those involved in creating every one of the main gags.

Dodds does a good job in her role, moving nicely from confusion to survival mode, and then on to kick ass. Ngo is, as just mentioned, the other person who stands out onscreen. That's it though. The other young women are just there to be victims, apparently, because it's almost impossible to care about them until a large killer appears in the same frame.

There are one or two key elements that I've deliberately left out here, and I certainly appreciated one of them as something that brings a nice twist to the standard stalker/victim tension, but The Furies feels very much like a film that D'Aquino made while worried that he couldn't just deliver a straightforward slasher flick. Considering the best moments are the brutal death scenes, he really didn't need to try and complicate things. It's an impressive feature debut from him, nonetheless, and I'd be interested to see what he does next. 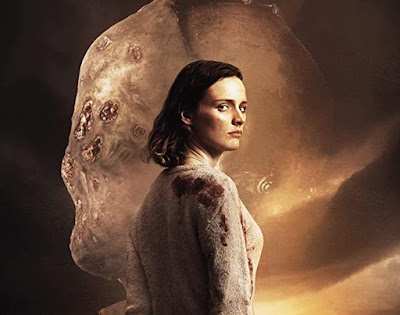