Despite this not being his first film, and despite Joint Security Area getting a fair amount of appreciation when it was released, Sympathy For Mr. Vengeance is essentially where it all began for Park Chan-wook. Or rather, to be fair, this film helped to establish his reputation, and it was then one that a lot of people revisited after being stunned by the brilliance of Oldboy.

The first part of his Vengeance Trilogy (this, Oldboy, and Lady Vengeance), Sympathy For Mr. Vengeance is the least bombastic of the three films, a quiet start to what would become an essential touchstone for fans of South Korean cinema.

Ryu (Shin Ha-kyun) is the main character, a deaf-mute factory worker trying to make enough money to pay for a kidney transplant that his sister desperately needs. Ryu ends up convinced by his anarchist girlfriend, Cha Yeong-mi (Bae Doona), that their problems can be solved by a kidnapping. Unlike other kidnappers, they will look after the child and hand her back, unharmed and happy, once they have received their money. There's already a child picked, young Yu-sun (Im Ji-eun), the daughter of Park Dong-jin (Song Kang-ho), a man who is connected to the employers who so recently laid off Ryu. Things inevitably don't go to plan.

It's probably the cool thing nowadays to cite this as your favourite of the Vengeance Trilogy, to claim it's the best one before Chan-wook got distracted by cinematic tricks and stylistic flourishes. It certainly remains an impressively unique and small-scale crime drama, showing someone engaged in a crime who isn't really a bad person. Not really. In a sequence of events you could easily describe as neo-noirish, Ryu is led into this plan by a "femme fatale", finds himself quickly out of his depth, and has no one he can turn to as he tries to tidy things up, leading to a third act full of danger and death.

Chan-wook knows the genre elements well enough, and allows them to feel fresh thanks to the central characters. Ryu is the sort of selfless and caring figure that will actually give up one of his own organs to help a loved one, except his blood type doesn't match, so it's quite heartbreaking to see things unravel in a way that we know is unlikely to end well for anyone involved.

Ha-kyun is great in the lead role, authentic and sweet without overplaying anything. Doona works well alongside him. They're mismatched, but also believable. Youn Ji-eun is very sweet as the girl who ends up kidnapped, and Kang-ho is a strong and menacing presence once he starts making moves to find the kidnappers in the second half of the film.

Although I still think that the next two movies supercede this one, Sympathy For Mr. Vengeance is a cracking film that deserves your time. It's different from so many others you will see in this genre, and the ending lands some powerful blows, all effectively painful because of the connection you get with the main characters.

Get this while you can. 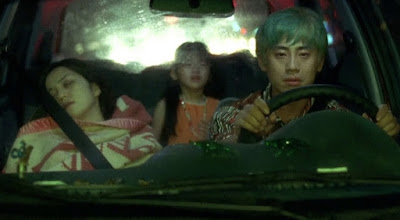