Before you read any further, and before I add some substance to my opinion, I would recommend that most people instead check out the Little Monsters from 1989 ahead of this one. The two may be very different films, and I am only going by my memory for the 1989 film, but I think the older one is a more enjoyable experience.

Written and directed by Abe Forsythe, this is another zombie movie. And it's another one using the walking dead to make you laugh as well as wince. Which would be well and good, if only the laughs were as good as Forsythe obviously thinks they are.

Alexander England is Dave, a young man with a few too many problems in his life right now. But he can distract himself from his own problems when he gets the chance to take his nephew (Felix, played by Diesel La Torraca) on a day out with his teacher, the beautiful Miss Caroline (played by the beautiful Lupita Nyong'o). Unfortunately, a zombie outbreak occurs, which leads to the adults trying to keep the kids safe without letting them know the full horror of the situation. Nothing will be helped by the selfish and sour entertainer known as Teddy McGiggle (Josh Gad).

Those elements should be perfect for throwing together and creating a great zombie comedy. You have the kids being allowed to remain oblivious, you have the stereotypically jaded children's entertainer, and you have Lupita Nyong'o. Sadly, it's only really Nyong'o that works, for reasons that are a bit hard to pin down. But I'll try.

First off, Forsythe just hasn't done enough work on the script. None of the characters are as well-formed as they could be, with one or two exceptions, none of the dialogue exchanges are as good as they could be, and there's nothing to show any real effort having been made beyond coming up with the central premise.

Second, the casting is not good. England doesn't have the right kind of charm to make his character more appealing as he tries to claw his way out of a major low point in his life, and Gad is simply not as funny as he should be, especially with his character being ripe for most of the bigger laughs. Okay, that's not all Gad's fault (I refer you back to the complaint about the script), but someone more acerbic in that role could have lifted things slightly. Nyong'o saves the whole film, almost single-handedly. The other person helping to make scenes watchable is actually young La Torraca, who is a natural onscreen presence, unaffected and sweet without seeming horribly saccharin.

Third, there's no sense of real peril. If someone fills their horror comedy with kids and then you get the idea that those kids could be killed at any moment then you can still have tension and feel that there are stakes to be played for. Forsythe never gives off that vibe, which makes this whole thing a redundant exercise in how to best present a horror comedy with no real horror and too few moments of comedy.

A lot of people ended up enjoying this, but part of me still suspects some of those people were actually talking about the 1989 movie. It didn't work for me, and I can't recommend it to others, but at least anyone forced to watch it will be able to enjoy those performances from La Torraca and Nyong'o. Which is enough to bump it up by a point or two. 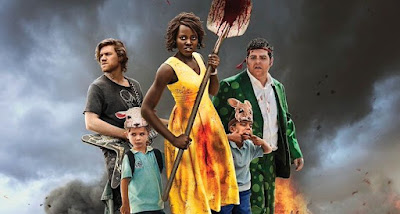