Three men and one woman spend some time in a quarry, sitting beside the cool water, enjoying the glaring sunshine, the grilled food, and the beers. But there's tension there. Bruno (Augusto Gordillo) suspects that his partner, Alicia (Paula Silva) is hiding something from him, and he's not wrong. Alicia has a strong connection with Tincho (Rafael Beltrán). It creates a love triangle that Bruno isn't fully aware of, but he knows something is up. Meanwhile, Tola (Luis Pazos) just wants to get stoned, enjoy the day, and wait until his young girlfriend arrives with some extra supplies.

For better or worse, and I am sure there are less controversial names I could use as a comparison touchstone, In The Quarry is a film I felt best described as Polanski-esque. It calls to mind the likes of Knife In The Water and Cul-de-sac, with one key difference. Those movies managed to do a better job of dancing through material that was both tense and also darkly comedic. In The Quarry is the first full feature co-written and co-directed by Bernardo Antonaccio and Rafael Antonaccio, and a lot of the mistakes are minor mistakes you could expect from first-time feature helmers, but they somehow keep adding weight that drags the film down.

First of all, this is tonally all over the place. It's quiet, it's grim, it's comedic, it's tense, it's nasty, it's all of these things without ever really moving anything along at a decent pace (even the very end of the film is much more of a whimper than a bang). The misjudgment is perhaps best exemplified during a sequence that features a kind of turtle mentioned earlier in the movie. This is obviously supposed to be a wryly amusing addition to the whole thing, but it plays out as something that was far too obviously signposted and not at all fitting after everything we've just sat through.

Second, the main characters here are a generally unlikeable bunch. That's not to say that they in any way deserve the fates in store for them, but it removes some of the tension when you cannot bring yourself to care about them.

Last, but by no means least, there's something missing here in terms of background/context. It's hard to believe a few of the main relationships factoring into the plot here, which is another thing working against the drama and the tension.

The cast don't do a bad job, not at all. Gordillo works hard to distract you from the fact that he looks like a Uruguayan Frank Whaley, but he's not helped by the script allowing him to do nothing more than either sit in a chair and look exasperated or be Mr Bastard McBastardy. He does good enough though, as does Silva in her role. Beltrán and Pazos are the other side of the coin, and both do excellent work with characters arguably full of wasted potential. In The Quarry is always building up to a confrontation that you're expecting to be one hell of a set-piece. When it doesn't really deliver that, you're left with not much of anything at all. Some may enjoy the subtlety of the material but I personally think that the keyword here is underwhelming.

Although technically competent throughout, In The Quarry is lacking some of the main elements needed to make it a solid thriller. Nothing feels earned, from the character dynamics all the way to the more vicious outbursts in the third act. I hope the Antonaccio brothers rewatch their final product and take some notes on what they can do better next time. They have talent, they just need to harness it to a better script next time, by either improving their own work or making use of other writers. 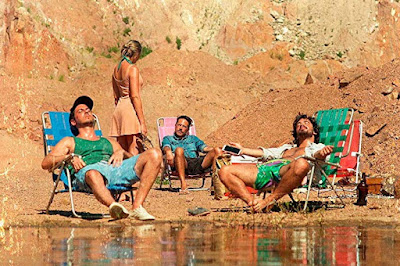