I was about thirteen or fourteen when I first saw Look Who's Talking, which is just about the perfect age. This is a family film, but it's from a time when you could start and end such things with footage of sperm swimming merrily on their way to tray and fertilise an egg. I was old enough to realise what I was seeing, realise that this was the result of *gasp* sex, and appreciated every time the film gave me a scene that presented a mix of simple guffaws and some mildly risqué humour.

Written and directed by Amy Heckerling, this is best summed up as the comedy about that baby voiced by Bruce Willis. That's all there is to it, basically, but it also has so much more. Kirstie Alley, who doesn't get nearly enough credit for her enjoyable comedic ability, is the Mollie, woman who gets pregnant by her married lover (George Segal, playing an amusingly selfish and obnoxious ass), and then finds her life intersecting with the taxi driver, James (John Travolta), who ends up speedily driving her to the hospital and helping as much as he can during the delivery of baby Mikey (aka voice of Bruce Willis).

There are a number of factors here that help to keep Look Who's Talking almost as much fun today as it was when it was first released, despite the dubious "the best thing I can do for my baby is find him a worthy father" motivation of the central character.

First of all, the cast are all great. Pulp Fiction may have been the more solid resurrection of John Travolta's career, but this role makes better use of his particular mix of charisma and his cheeky, rugged charm. He's always done well at roles that show up his flaws, often as he tries to put on a front in front of others, and this is no exception, although his flaws are largely only flaws in the eyes of a woman who is being a bit too critical and judgemental. Alley is a lot of fun, whether she's suffering the symptoms of pregnancy, being fed line after ridiculous line by Segal, checking out how much her own breasts have swelled, or just being worn down by a baby that has figured out crying gets him fed. Some of the line delivery from Willis isn't as good as I can imagine it being from some others who were considered for the role (Steve Martin, Robin Williams, etc) but his smirky sassiness generally suits the script. Segal is ridiculous and fun, Olympia Dukakis is an over the top movie mom, and Abe Vigoda gets a couple of nice moments in his role as the grandfather of Travolta's character.

Second, the writing and direction from Heckerling are just what you want for this material. She takes the concept, makes a lot of the obvious gags (that still raise a chuckle), and expertly keeps everything moving along nicely for the perfect popcorn movie runtime of just about 90 minutes (IMDb has it listed at 93 minutes, the main point is that this film starts, entertains you for the duration, and ends before overstaying its welcome). Although coming hot on the heels of a number of other movies from this time focusing on the joys/perils of sudden parenthood (e.g Baby Boom, She's Having A Baby, Three Men & A Baby, and, well, Parenthood), this doesn't feel like a cash-in on the trend. Heckerling was inspired to make the movie by her own experiences with parenting, including the way her husband would make up a voice as he pretended to relay what their child might want to say, and that inspiration takes this on a different path from those other movies, even if there is some crossover. Point me towards any comedic look at parenthood and I will eat my hat if there's not a scene in which a parent at one point has to deal with a stinky nappy.

Third, and connected to the previous point, the high concept here is centred in something that all parents can identify with, whether it's wanting to know what your baby is desperate to communicate with you, being worn out at the end of a long day, or even trying to arrange date nights around the schedule of a little one you cannot just entrust to the care of any babysitter.

There's also a decent selection of hits on the soundtrack, a few good nods to Travolta's past, and special effects showing Mikey in utero that hold up surprisingly well. I think people, for a variety of reasons, like to dismiss some of the hit films of years gone by, viewing them as something they enjoyed at the time but not worth revisiting. Look Who's Talking is still worth your time, even if it is perhaps not quite as sophisticated or smart as it could have been. It isn't aiming for that. It just wants to entertain, and make you laugh. It succeeds.

You can buy this set here.
Americans can also buy that, or get this here. 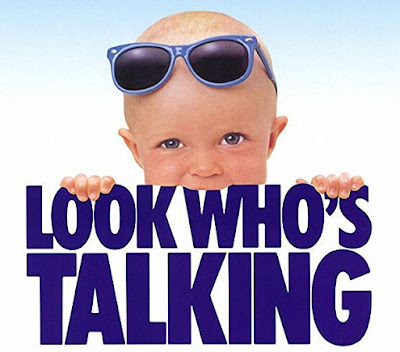